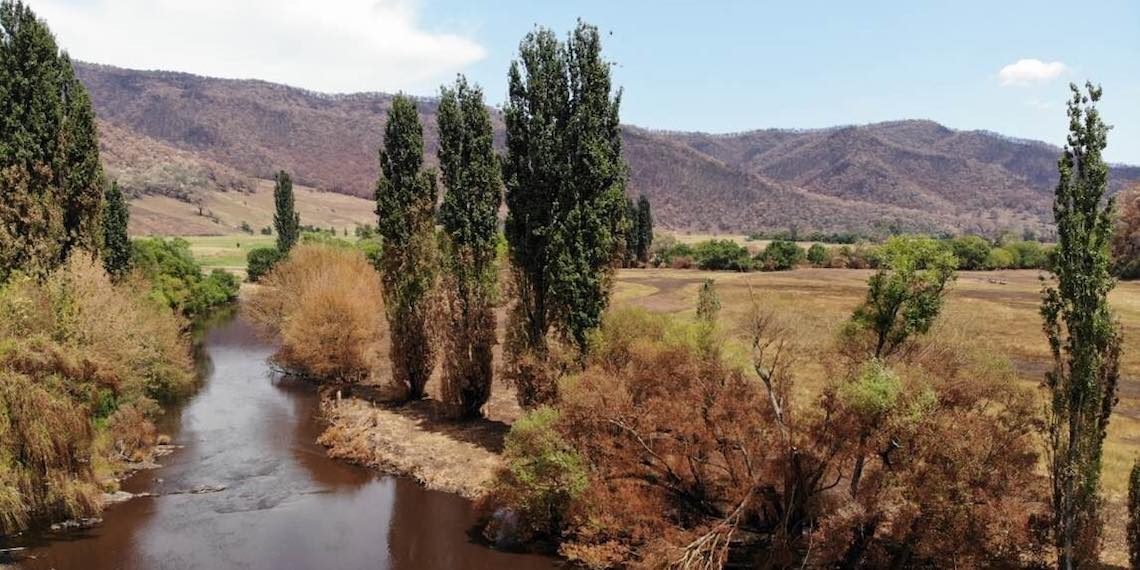 The period of 2019-20 shall be remembered for its devastating fires across the east coast of Australia. Heavy rainfall following the bushfires caused increased runoff loaded with pollutants such as ash, mud, nutrients, organics and metals. 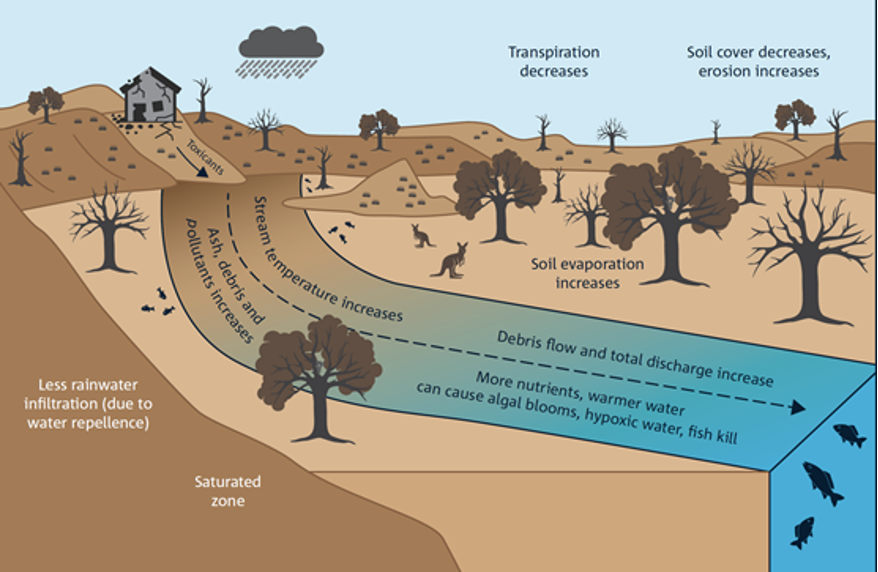 In a nutshell, fire increases the potential for runoff and erosion due to a decrease or loss of soil cover. Rain after fire triggers debris flows and erosion events involving a fast-moving mass of unconsolidated, saturated debris. The sediment runoff following fires carries elevated levels of ash and charcoal that immediately impacts water quality.

This study showed a 200% increase in sediment load in the first year following the bushfires compared to pre-fire conditions. For Lake Hume, the load was up to fivefold greater. Further analysis of Shoalhaven (NSW) and Gippsland Lake (Victoria) catchments by CSIRO demonstrated widespread increases in erosion and sediment transport in waterways.

Across large parts of the burned areas, the soil was immediately subject to intense rainfall as the region shifted from El Niño (dry) to La Niña (wet) dominated weather patterns. The monthly rainfall in January to February 2020 was very much above average across the entire burned areas and, in many locations, rainfall was highest on record.

Researchers reported daily peak loads of 145 tons of dissolved organic carbon, 33 tonnes of nitrogen and 6.5 tonnes of phosphorus respectively, in the upper River Murray after the bushfires. In general, post-fire nutrient loads were very high compared to average loads in the River Murray, which vary from about 0.1 to 1 tonnes per day for nitrogen and 0.01 to 0.1 tonnes per day for phosphorus.

Immediately following the first pulse of sediment, dead fish (European carp and Murray cod) were observed on the bank of the River Murray. Ash and nutrients combined with high summer water temperatures often trigger increased microbial activity, which in turn can deplete the dissolved oxygen (DO) concentration in the water (also known as hypoxia).

Widespread hypoxia can lead to large‐scale fish kills, as happened after the bushfires. However, low levels of DO were not observed. A DO logger installed in March 2020 at Jingellic (New South Wales) with hourly recording of data revealed more than 6 mg DO per litre during runoff events. Dead fish were observed with large quantities of sediment and ash trapped in their gills causing localised fish kills.

However, one year after the bushfire, Lake Hume monitoring found oxygen depleted water together with increased levels of iron and manganese in deeper layers (MDBA, 2021). Lake Hume is the source of water for Wodonga (Victoria) and Albury (NSW) as well as downstream River Murray communities and agriculture.

Heavy metals such as zinc, arsenic, chromium, nickel, copper, and lead concentrations in runoff water from the burned upper Murray catchment were well above guideline values for healthy waterways.

When the samples were laboratory tested, results demonstrated that the growth rate of duckweed was reduced by 30-60% following a seven-day exposure to bushfire affected river water (McInerney et. al, 2020). Further, water flea reproduction was significantly impaired and freshwater snail larvae were killed off completely after 14 days of exposure. These results also suggest long-term impacts on birds and fish due to a lack of food sources.

Prevention of sediment transport to waterways following a fire is difficult because of the vast spatial scale of bushfires. Sediment management through check dams and sediment barriers is often not an option because of the large number of catchments affected and contributing to water‐quality issues in receiving waterways.

But if we are protecting high value assets (e.g., water supply reservoirs), we can assume a fire will occur at some point, and investment in barriers and check dams to reduce sediment transport may be warranted.

Restoration of riparian zones adjacent to waterways can be an effective measure to reduce sediment transport into rivers in settings where sediment delivery from hill slopes adjacent to rivers makes up a large fraction of the load. Vegetation growing on stream banks can help trap sediment and reduce nutrient loads entering waterways.

Other benefits of riparian restoration include increased shading, which can reduce the impacts of extreme high temperatures on aquatic biota, and the supply of carbon to rivers from leaves and litter that fuel instream food webs. The emphasis in riparian restoration should be on those reaches where the vegetation was degraded prior to the fire.

Improving longitudinal connectivity within waterways is another mechanism that can help reduce the severity of impacts of fire on stream inhabitants. Built structures, such as dams and weirs, can limit the ability of biota to escape localised areas of poor water quality. For example, in regulated waterways, the installation of fishways may be necessary to enable fish to move away from areas of poor water quality.

However, dams and impoundments can also be used to help mediate bushfire effects on streams. The release of high-quality water from dams can be used to dilute poor quality water washed in from fire-affected tributaries.

Regardless of what mitigation strategy is pursued, there is a large demand for tools to help focus efforts on those areas where the risk to ecological, social, or economic values is high. Simulations like those undertaken in the CSIRO study (Biswas et. al, 2021) can underpin risk assessments to water quality across catchments post‐bushfire to prioritise actions.

Jessica Abelsohn
Bushfires have a devastating impact on all facets of life, including on biodiversity and native animals. Following the 2019–20… Read Full Paper