Experts are investigating reports that thousands of fish might have been killed after rain washed ash into parts of the Macleay River.

The NSW Department of Primary Industries (DPI) said fisheries officers were dispatched after locals reported dead fish washing ashore on the banks of the Macleay River.

The fish kill is a distressing sight for residents, said local Arthur Bain.

“All along the river, fish are gasping and dying … No one has ever seen this before; it has left layers of black mud and stinking, rotting fish,” he said.

He added the scale of this fish kill was “unprecedented”, and stretches for possibly 60-70 km from where the Apsley River feeds into the Macleay River.

“It’s pretty devastating if you’re looking at a 60 km stretch of river,” he said.

“We’ve seen fish kills on the river after bushfires before, but never anything like this.”

Bain added that locals are trying to clear away the dead fish and re-oxygenate the water. However, he fears it might take years for the ecosystem to recover from the loss.

This stretch of the Macleay River experienced a similar fish kill just a couple months ago, and more mass fish kills are likely to happen in coming weeks as this record-breaking bushfire season continues.

Heavy rain, like what many parts of NSW are experiencing at the moment, can wash ash and charcoal into river systems, leading to a spike in bacteria. As bacteria multiply, they suck oxygen out of the water, creating the perfect conditions for fish kills.

A NSW DPI spokesperson said fisheries staff have been on high alert for these circumstances since the start of bushfire season.

“Current rainfall events are adding ash from the extensive bushfires throughout the region into local catchments, as well as other organic material and sediment,” said the spokesperson.

“This can cause rapid drops to oxygen levels in the water.”

Bushfires around the country are an ongoing threat to Australia’s ecological diversity. It’s estimated that Australia-wide, more than 1 billion animals have been killed, from birds to reptiles and mammals. The danger posed to terrestrial animals is well documented, but the threat to aquatic life is less well known in the public sphere.

Jessica Abelsohn
Bushfires have a devastating impact on all facets of life, including on biodiversity and native animals. Following the 2019–20… Read Full Paper

Hungry turtles can clean up waterways 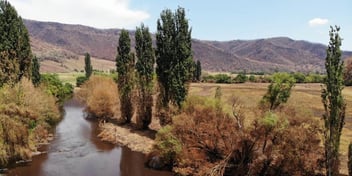