Oxley Creek is currently a heavily polluted waterway running through south ­Brisbane, but it’s set to become a world-class ‘green living’ amenity under a draft masterplan released by the city’s council last month.

The draft masterplan for the Oxley Creek redevelopment plans to transform the 15-kilometre waterway between Brisbane River and Larapinta into a sanctuary for wildlife and community enjoyment.

Prepared by Brisbane-based design studio Lat27 and Oxley Creek Transformation, the masterplan includes provisions for a nature-based adventure park, bird-watching facilities, a recreation centre and a network of walking and canoeing trails.

“Oxley Creek Transformation is committed to reducing the impacts of industry and development on the creek and its surrounds, embedding flood resilience into the corridor and growing its rich network of green spaces,” he said.

But Chamier said the project is not without its challenges.

“Seeking environmentally sensitive outcomes while transforming the Oxley Creek corridor into a vast multi-use parkland and attracting investment to unlock its economic potential will be a balancing act,” he said.

The Brisbane City Council announced $100 million for the project in 2016 and Mayor Graham Quirk said prioritising the environment was central to creating a liveable city resilient to future change.

The draft masterplan was published on 26 April. The final masterplan is due to be released by late 2018 with detailed design and implementation to follow.

City of Sydney commits to water recycling at Green Square

Water Source
The City of Sydney is building a new town centre in Green Square, including a decentralised stormwater recycling system to… Read Full Paper 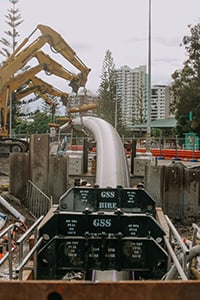