The ACT is now home to the largest rain garden in the southern hemisphere, which will treat about 1800 L of stormwater a second before it enters Lake Tuggeranong.

The Isabella Plains rain garden is one of 20 water quality infrastructure projects completed over the past two years as part of the $93.5 million ACT Healthy Waterways scheme.

Other initiatives included ponds, wetlands, creek restorations and channel reconstructions, all designed to tackle poor water quality at the source by reducing the levels of nutrients, sediments and pollutants entering lakes and waterways.

The Federal Government contributed $85 million to the project, which has now entered a two-year establishment period. This will see over half a million plants settling into their new environments and beginning to filter water.

ACT Senator Zed Seselja said the investment would have a positive impact on residents in the Territory and further downstream.

“The project represented a once-in-a-generation opportunity to significantly improve water quality in the ACT’s lakes, as well as the Molonglo and Murrumbidgee rivers and the broader Murray-Darling Basin,” Seselja said.

“Clean water is essential for life, not just for us but for all the wildlife and plants that depend on it. Clean water is also a vital resource for households and businesses.”

Along with the infrastructure projects, the Healthy Waterways initiative also involved education, monitoring and research activities.

Water scientist Dr Fiona Dyer from the University of Canberra’s Institute for Applied Ecology, led a team of researchers investigating sources of stormwater pollution and how these pollutants behave in lakes and ponds.

ACT Minister for the Environment and Heritage Mick Gentleman said further research will be done into management options for Lake Tuggeranong, with the aim of reducing blue-green algal blooms.

Gentleman said raising public awareness to prevent pollutants from entering waterways in the first place had also been a focus.

“H2OK: Keeping Our Waterways Healthy has been a fantastic education program, targeting households and businesses with it message of ‘only rain down the stormwater drain,” Gentleman said.

“By the end of June there will be nearly 1000 stencils on footpaths all over the ACT reminding us all that stormwater flows into our lakes and waterways.” 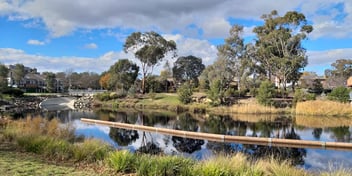