More than 5200 square metres of parkland in Canberra’s south is being transformed into a state-of-the-art rain garden, a move by Local and Federal Governments aimed at curbing water pollution in the nation’s capital.

The rain garden will be located in Tuggeranong, treating up to 1800L of stormwater a second, filtering runoff before it enters into Lake Tuggeranong.

The project is one of six being launched around Canberra within the next two years as part of the Commonwealth's Healthy Waterways initiative, ACT Environment Minister Mick Gentleman told the Canberra Times.

"It's the biggest infrastructure project per square metre that we've ever done in the ACT… so it's quite an ambitious scheme," he said.

Gentleman said the project is also about changing how we think about stormwater, changing attitudes towards wastewater and pollution, and encouraging environmental regeneration.

"What we understand now is that that doesn't allow the water in to the aquifer to be treated naturally before it goes into the lakes," he said.

“It's not just about cleaning up things like Lake Burley Griffin and Lake Tuggeranong… but the flow on effects downstream in the Murray-Darling Basin are also very important so there's a national interest here," Seselja said.

"Obviously Tuggeranong has had some some particular challenges and that's one of the reasons there is a reasonable focus on Tuggeranong," Seselja said. 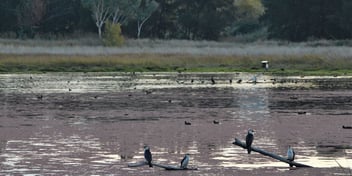 Could wetlands and urban ponds be used for more than nutrient removal?

Cecilia Harris
Canberra’s constructed ponds and wetlands are hard at work removing nutrients from stormwater flows, but the findings of a recent… Read Full Paper
Advertising