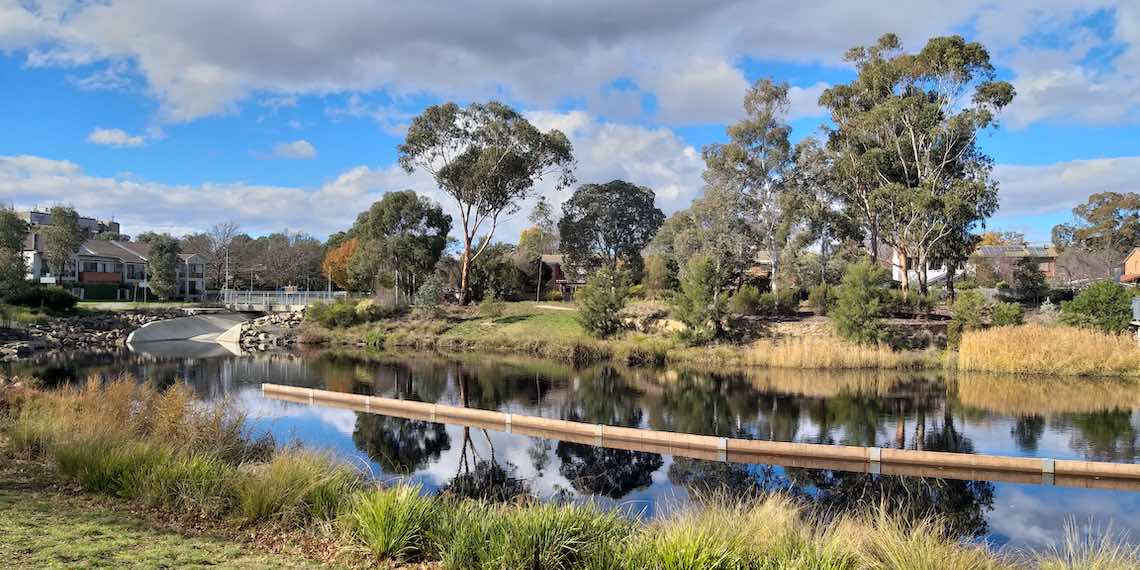 The ACT’s $93.5 million Healthy Waterways project has dramatically reduced nutrients, sediment and other pollutants from entering Canberra’s lakes. But there’s still plenty to do, particularly around community education.

Over the past decade, in the depths of summer’s heat, Canberrans have put up with an increasing number of lake closures.

Algal blooms have made waterways unusable for swimmers, rowers, sailboarders and the like. Triathlons have been forced to become duathlons, families have had to travel to the coast or to river beaches for a cooling dip, and pets have had to be kept away from the water’s edge.

The assumption around the cause of the blooms was that during the summer months, as the lake formed thermal layers in a process known as stratification, the water at the bottom lost oxygen, causing a release of nutrients that drove the algal blooms.

However, there was no data to support that theory.

“The assumption was that internal processes were driving the blooms,” said Dr Fiona Dyer, Associate Professor of Water Science at the University of Canberra.

Dyer, as Chief Investigator, led the Healthy Waterways research team, whose job it was to get to the bottom of the lake’s algal issues.

“Without our testing that assumption, there would have been significant investment in something that would have made no difference. This knowledge totally changed the investment strategy.”

Where did the investment come from?

In July 2008, the Council of Australian Governments announced the Murray-Darling Basin Intergovernmental Agreement.

The basin, which covers one-seventh of Australia, is home to three million people who depend on its water. Extreme drought and low flows, as well as past practices, placed great stress on the water systems in the basin.

The agreement brought the Commonwealth Government into line with the NSW, Victoria, ACT, Queensland and South Australia state governments in planning and funding water quality initiatives.

The Federal Government contributed $85 million, with the ACT Government bringing the balance up to $93.5 million.

In 2019, it was announced that the ACT was now home to the Southern Hemisphere’s largest rain garden. A filter for stormwater prior to it running into Lake Tuggeranong in Canberra’s south, the garden can treat about 1800 litres of stormwater per second.

The project included the addition to waterways of 465,000 wetland plants and, surrounding the assets, 160,000 dryland plants.

Eleven agencies and organisations combined for what is agreed to be an ongoing, 30-year catchment strategy to manage the series of assets. Collectively the assets have been estimated to have the capability of intercepting 1900 tonnes of sediment, 14 tonnes of nitrogen and 2.5 tonnes of phosphorus annually.

However, during a major rain event, the new infrastructure will not catch all of the water before it runs into lakes. The major changes still to be made are upstream, in suburbs, in front yards, gardens and driveways.

How to change behaviour

Another assumption busted by Dyer’s research team was the one that said most nutrients move around the landscape attached to clay particles during rainfall events.

“We found that almost half the phosphorus in that urban environment was in dissolved form,” she said. “That’s significant, because it’s as if liquid fertiliser is being applied to the lake. Cyanobacteria are able to use phosphorus more easily when it’s dissolved.”

The next part of the puzzle was to figure out where the nutrients are coming from. There were no obvious major contributors, meaning they’re coming from the urban landscape.

“We don’t have an exact answer right now,” Dyer said. “But in Tuggeranong, for example, we know it’s not coming from reserves or farmland. We know it is coming from suburban areas. I think the most likely culprit is the leaves and the organic matter that gets caught up in the drains in the streets.”

Research is continuing, but if Dyer’s suspicions are correct, the solution will involve a massive public education campaign. When people are sweeping and blowing leaves from driveways into the street, for example, they must now be convinced of the value of instead picking up those leaves, mulching them and using them on their gardens, or putting them in Canberra’s newly distributed green bins for fortnightly collection.

Ogden agrees that community education is a large, missing piece of the puzzle. So far, he says, the program has simply “dipped a toe in the water”. The ACT Healthy Waterways team erected lakeside signage and stencilled messages on pathways, developed social media campaigns and held educational sessions and stalls at community gatherings, such as the National Multicultural Festival and the Canberra Show.

A total of 37 per cent of residents saw some form of messaging around the ACT Healthy Waterways program, but a community education program that changes behaviour in the suburbs is going to take a lot more work. “We will get into this in earnest in the next phase of the program,” Dr Ogden says.

This article was originally published in the 2021 edition of Current as "Creating healthy waterways".

Water Source
“Only rain down the stormwater drain” has been launched as the slogan for Canberra's new H2OK education campaign. Read Full Paper