WaterNSW is planning a bulk water transfer from Split Rock Dam to Keepit Dam, both of which are located near Tamworth in the state’s north west. The release will begin on 20 October and continue until early December.

Under the scheduled release, a maximum of 34,900 ML will be transferred, with releases ranging from 100 ML per day to 1900 ML per day. Peak releases will occur from 25 to 28 October.

Although NSW received some much-needed rainfall in recent weeks, the latest Department of Primary Industries (DPI) seasonal update shows 98% of the state remains in drought.

He said weather conditions would be closely monitored to ensure any changes in demand due to rainfall were factored into future releases during the water transfer.

“The severe drought conditions across NSW has impacted on all water storages, including Split Rock and Keepit Dams,” Langdon said.

“To satisfy the anticipated demand this summer, we have to transfer water from Split Rock Dam to Keepit Dam to fill those orders.”

WaterNSW said the releases would result in higher than usual water levels, so the public should take care when using the Namoi River and consider moving any equipment or stock to higher ground before the transfer begins. 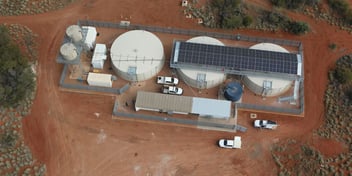