Non-potable water will soon bolster water security in the Dubbo region during drought, thanks to the Dubbo Regional Council’s (DRC) pipeline project delivered under the Water for the Future, which is in final stages of construction.

DRC has engaged Jonishan to construct a 19 km non-potable water pipeline throughout Dubbo that will transfer groundwater from the city’s established recreational bores to the John Gilbert Water Treatment Plant.

DRC CEO Murray Wood said the project will be an invaluable piece of infrastructure during the next drought and will help mitigate impacts of water shortage in the region.

“Our region was hard hit by consecutive years’ extreme drought; we saw a huge economic and social impact on our communities as a direct result,” he said.

“The cross city pipeline will ensure council has the security and the confidence to provide water, an essential resource to our residents and businesses, in times of severe drought.” 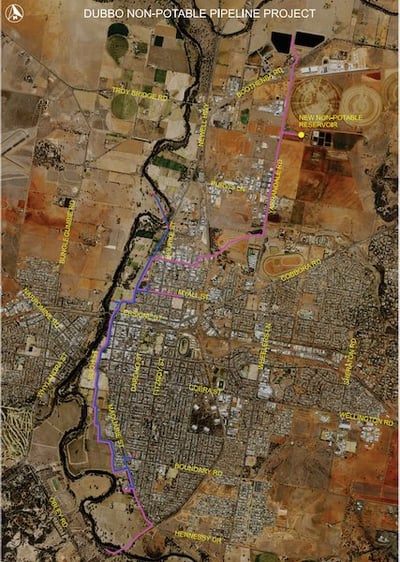 The route the pipeline will take.

DRC Director of Infrastructure Julian Geddes said the final stages of the pipeline’s construction and installation are an important part of the overall project to deliver water security.

“The pipeline is a key component of connecting new and existing bore infrastructure to the water treatment plant. The final stage of this part of the project involves a lot of infrastructure testing,” he said.

“The pipes are filled up with water and must maintain a consistent volume and pressure to ensure there are no leaks within the network. So far we have had no issues passing these milestone tests.”

Geddes said the final stage of laying the pipeline will also involve resurfacing the patches of road that have been disturbed during the construction.

“We understand that there are certain areas of the local road network that need some further repair and we are working with contractors to get this underway sooner rather than later,” he said.

DRC recently installed five messaging boards along the pipeline route to notify the local community that night works will soon commence to further repair and improve the road surface.

The pipeline has been fully funded under the NSW Government’s $30 million-dollar grant to help future drought-proof the area, with the investment covering the delivery of the pipeline, the establishment of new bores, and purchasing additional groundwater entitlements.

Water Source
Forward-thinking water management strategies have paid off for the central New South Wales (NSW) town of Parkes, which has a… Read Full Paper

What are the challenges of supplying recycled water?

Water Source
Population growth means an increased demand on drinking water supplies, and a greater need to use the ‘right’ water for the ‘right’… Read Full Paper