World Wetlands Day: Promoting the sustainable use of wetlands

Wetlands are earth’s most threatened ecosystem, with 35% of these habitats lost globally since 1970, according to the 2021 Ramsar Global Wetland Outlook. And restoring them will be key to meeting the Sustainable Development Goals and managing climate change.

This year's World Wetlands Day (2 February 2022) is focused on calling for the financial and political investment for the protection and restoration of these incredibly important ecosystems.

Land-use change is the biggest contributor to inland wetland degradation, including agriculture, and climate impacts like sea-level rise are occurring much faster than expected, involving the loss of arctic and montane wetlands.

Protecting, restoring and nurturing these special habitats will be crucial in climate mitigation efforts, bio conservation and in ensuring communities stay healthy – the global value of wetland ecosystem services for human health and security is estimated to be $47.4 trillion a year.

Healthy wetlands play a key role in environmental conservation and are also crucial in supporting the unique biodiversity they house, including the health of birds, animals, fish and plant species around the world.

Here, Water Source takes a look at how wetland ecosystems are being created and nurtured in two locations in Australia, by Water Corporation and Healthy Land & Water.

Completed in 2019, the Peters Place Reserve is an award-winning project from Water Corproation’s Drainage for Liveability program, transforming stormwater drains into green spaces.

Once a weed-filled drainage site, the Peters Place Reserve is now a thriving wetland.

“Urban wetlands and waterways, and the ecosystems they support, aren’t just pleasant to look at, but also provide an efficient way to reduce urban heat island effect from roads and other hard surfaces which heat up during the day,” she said.

“Being a responsible environmental steward is central to how Water Corporation operates, and the Drainage for Liveability program is one way we’re delivering on this commitment.”

Peters Place Reserve is one of many drainage sites in the Bayswater Brook Catchment area in Perth, which is the fifth highest contributor of nutrients into the Swan River.

“Peters Place is a grassed park with a traditional fenced stormwater drain running along its boundary on three sides,” Brown said.

“The park had limited native vegetation, so we took the opportunity to create a wetland that would slow the flow of water through a series of connected, vegetated, slower flowing basins.

“These basins contain year-round groundwater, and in winter the area fills completely to form a wetland. This mimics pre-European settlement wetlands prevalent across the Swan Coastal Plain in Boorloo/Perth (Whadjuk Noongar country).”

With the wetland rehabilitation of Peters Place Reserve, stormwater is naturally cleaned as it flows through the landscape, supporting plant growth while reducing nutrient levels in the stormwater.

“By planting native vegetation and slowing the flow of water, we’re able to strip nutrients from water before it discharges to the Derbal Yerrigan (Swan River),” Brown said.

“The river is incredibly important to the people of Perth, and at Water Corporation we have an important role to play in supporting its long-term health.”

“The project also aims to enhance general liveability and amenity of the wider suburb by creating a public open space that is cooler and provides a habitat for native fauna,” Brown said.

“In addition to the environmental benefits of cleaner water, the program helps give something back to local communities by creating spaces everyone can enjoy.”

Ongoing since 2019, Healthy Land & Water has been focusing on reducing threats to the Moreton Bay wetland and restoring habitat.

Extending from the foreshores of Brisbane, Moreton Bay is internationally recognised as a Ramsar Wetland for its biodiversity and ecological significance.

“Wetlands are known as the ‘kidneys of the catchment’ for good reason. They are essential in helping to improve water quality by filtering out contaminants before they get out into our oceans where they can cause untold harm to marine life and ecosystems,” she said.

“They also provide food sources and habitat for animals and plants. Perhaps less known is the important role they play in mitigating the impacts of flooding by retaining and then slowly releasing floodwaters.”

McLellan said the Moreton Bay (Quandamooka) wetlands are amongst a select number to be recognised globally, through the Ramsar Convention.

“Spanning more than 120,000 hectares, it supports more than 50,000 wetland birds, including 28 species of migratory birds, more than 750 species of fish and a diversity of marine mammals, including eight species of dolphin, five species of whale and the dugong,” she said.

The Curlew Island restoration project is helping to stablise and protect shorebird populations in Southern Moreton Bay by providing habitat for the Beach Stone Curlew and other listed species.

The Coochiemudlo Island wetland weed control project is improving the integrity of the Melaleuca Wetland by tackling weeds, improving the habitat for native flora and fauna, including the Lesser Swamp Orchid and the wallum sedge frog.

“It has been a significant undertaking and the outcomes we’ve achieved have only been made possible by the huge number of people and groups coming together under Healthy Land and Water’s Moreton Bay Ramsar Wetland project. 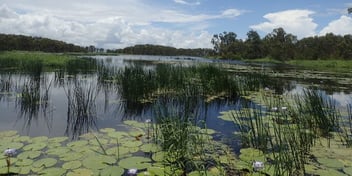