What can we expect in the Murray-Darling Basin this summer? 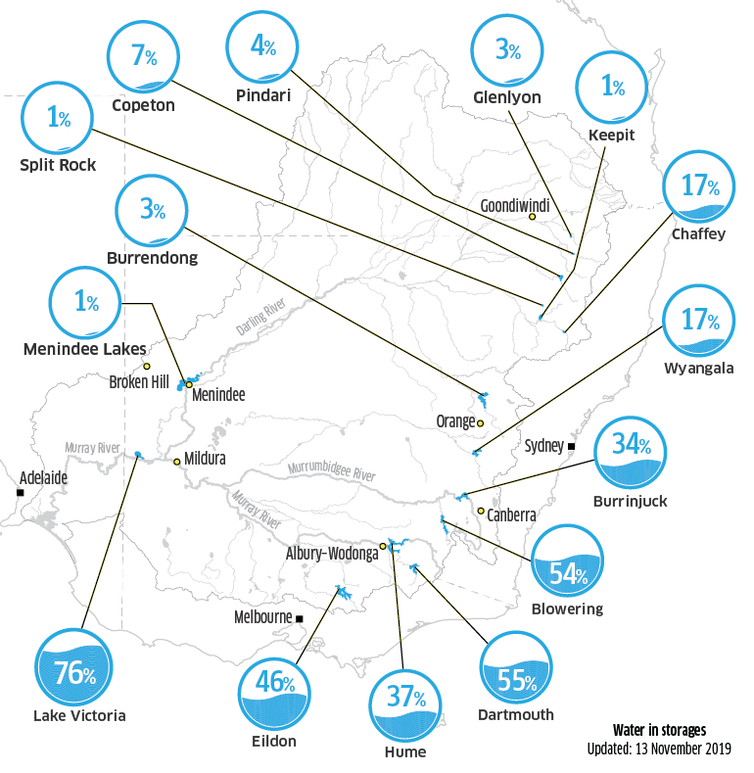 This article was originally published on The Conversation.

A grim summer is likely for the rivers of the Murray-Darling Basin and the people, flora and fauna that rely on it. Having worked for sustainable management of these rivers for decades, I fear the coming months will be among the worst in history for Australia’s most important river system.

The 34 months from January 2017 to October 2019 were the driest on record in the basin. Low water inflows have led to dam levels lower than those seen during the devastating Millennium drought.

No relief is in sight. The Bureau of Meteorology is forecasting drier-than-average conditions for the second half of November and December. Across the summer, rainfall is also projected to be below average.

So let’s take a look at what this summer will likely bring for the Murray-Darling Basin – on which our economy, food security and well-being depend.

Not a pretty picture

As the river system continues to dry up and tributaries stop flowing, the damaging effect on people and the environment will accelerate. Mass fish kills of the kind we saw last summer are again likely as water in rivers, waterholes and lakes declines in quality and evaporates.

Three million Australians depend on the basin’s rivers for their water and livelihoods. Adelaide can use its desalination plants and Canberra has enough stored water for now. But other towns and cities in the basin risk running out of water.

Governments were warned well before the drought to better secure water supplies through infrastructure and other measures. But the response was inadequate.

Some towns such as Armidale in New South Wales (NSW) have been preparing to truck water to homes, at great expense. Water costs will likely increase to pay for infrastructure such as pumps and pipelines. The shortages will particularly affect Indigenous communities, pastoralists who need water for domestic use and livestock, irrigation farmers and tourism business on the rivers.

Infographic: A recent history of the Murray-Darling Basin