Blue carbon sequesters between two and four times as much carbon as terrestrial forests. At the 2015 UN Climate Change Conference – COP21 – the Australian Government launched the International Partnership for Blue Carbon to protect and restore coastal blue carbon ecosystems, such as mangroves, tidal marshes and seagrasses, for climate change mitigation and adaptation.

In addition to the International Partnership, the Australian Government contributes to blue carbon through the Ramsar Convention on Wetlands of International Importance, and plans to include it in the Emissions Reduction Fund. The fund was established in February 2019 to purchase low cost abatement and generate regional benefits, including through energy efficiency, waste and wastewater. Specific to blue carbon – the reintroduction of tidal flow to restore mangrove and tidal marsh ecosystems has been identified as an action with strong potential.

The recently released Blue Carbon Strategy for South Australia “sets a path for the South Australian Government to establish a state-wide, evidence-based program of projects and research geared towards blue carbon ecosystem protection and restoration. We spoke with Dr Alice Jones of the University of Adelaide and Dr Milena Fernandes of SA Water about the potential benefits.

What are the benefits of restoring blue carbon ecosystems?

AJ: Blue carbon is a more effective sink for carbon than many vegetated terrestrial ecosystems, although there are smaller areas available overall. Apart from emissions mitigation, restoring or maintaining these coastal ecosystems produces significant co-benefits. These can include protecting the shoreline from erosion, improving water quality and fisheries as well as other recreational benefits, such as boardwalks, snorkelling and kayaking. Saltmarsh, in particular, plays a valuable role for migrating birds.

What is the status of blue carbon knowledge?

Blue carbon has been studied in other areas of Australia, however, the Goyder Institute’s projects (one run by us, through the University of Adelaide and one run through Flinders University) have been the most significant research on blue carbon in South Australia. Two recent articles in Nature Communications, led and co-authored by a number of Australian researchers, provide a summary of the current knowledge about Australian blue carbon ecosystems and a roadmap for future blue carbon research.

How has your research informed the Blue Carbon Strategy for South Australia?

AJ: Our knowledge of blue carbon systems cannot be translated simply across regions – tropical, semi-tropical, temperate and semi-arid regions generate markedly different results. The Goyder research program showed that although South Australian blue carbon sequestration rates were lower than the national average, they were higher than we expected, roughly 66% to 75% of the average, and higher than equivalent figures for eucalypts and grasslands. We estimate that blue carbon has the potential to offset around 4 % of the State’s annual carbon emissions.

AJ: We need to conserve and restore blue carbon ecosystems first by not clearing or damaging them. Second, we can relieve stressors such as the hard barriers created by coastal development and water pollution, which prevent these ecosystems expanding and migrating inland. Third, we can look at options to restore blue carbon ecosystems, for example, by returning marginal drained or ponded farmland to its natural coastal form. We can enhance the opportunities we have. For example, we can reconnect coastal ecosystems to tidal flow where that has previously been cut off (by building seawalls and land reclamation).

MF: We have a program of research on mitigating the impacts of emissions to the coast, and our primary focus is on seagrasses. They can be degraded by discharges of treated wastewater, stormwater, and from industry. About 30% to 40% of mapped cover, or 6500Ha, is estimated to have been lost along the Adelaide coast, and the degradation started in the 1950s, peaking during the 1970s until the 1990s.

Since 2013, we have observed natural recovery, mostly due to a significant reduction in nitrogen in treated wastewater effluent. Nitrogen promotes the growth of macroalgae on seagrass leaves and phytoplankton in the water column, limiting the seagrass’ exposure to light. The reduction of nitrogen inputs has resulted in increasing seagrass cover over the last decade, with multiple co-benefits being realised, including carbon sequestration.

MF: Restoration of blue carbon ecosystems has the potential to generate additional benefits through carbon credits. However, it has been difficult to arrive at suitable methods (Note: the Australian Government has recently published Towards an Emissions Reduction Fund Method for Blue Carbon). The initial focus of the blue carbon scoping work for the Emissions Reduction Fund has been on mangroves, with their carbon stores and accumulation relatively easier to estimate. Seagrasses pose more difficulty, with their carbon sequestration depending heavily on their regional location and hydrodynamics.

MF: The implications of changes in sea level rise, wave dynamics and temperature are unknown. For example, in the South Australian gulfs, we can postulate that temperature changes are likely to impact seagrass productivity and phytoplankton behaviour.

This article is from the AWA Sustainable Development Goals Specialist Network’s April 2020 newsletter. To join the SDG network please add us to your member profile. Other articles from the April newsletter can be read via the links below.

Australia as a whole has been flatlining on SDG 13

Meeting SDG 6 and SDG 13 targets together 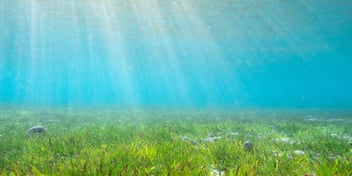 Cecilia Harris
Blue carbon habitats provide a plethora of ecosystem services, including the ability to store and sequester carbon, but much more… Read Full Paper 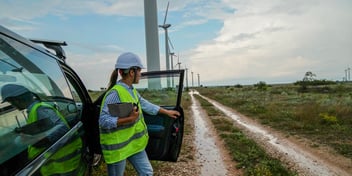 Cecilia Harris
This month, WSP became the first environmental services consultancy in Australia to commit to halving the carbon footprint of its… Read Full Paper

Erin Riley
Scientists at the Queensland University of Technology have developed a novel approach to carbon capture, using water and an… Read Full Paper
Advertising