Shay is relatively new to the water industry. He has been in his current role at Eurofins as General Manager – Water Testing Australia since 2019 and was quickly introduced to AWA and elected as a committee member for AWA VIC branch in 2020.

Originally, born in a refugee camp in Vietnam, Shay – a third-generation refugee – and his family migrated to New Zealand when he was 7. From drinking water collected in big clay barrels to a running tap. From long drops to flushing toilets! Once you’ve experienced either of the former, you don’t forget. Fast forward 10 years, a high school drop-out in West Auckland lands a role in a factory where he began his professional career and ultimately found his passion in leadership.

Through Eurofins, he moved from NZ to Melbourne in 2017 to support our Australian businesses. With over 15 years of work experience within manufacturing and engineering behind him, he project managed the build of Eurofins 8000sqm flagship laboratory campus in Melbourne now supporting over 300+ staff. The $20m+ project was completed within 18 months, on time and in budget. From there, he was ready for the next challenge; heading up Eurofins’ water testing laboratories across Australia.

On being elected VP (and President-Elect) for AWA VIC Branch, Shay said “I am super excited to start my new role and supporting our current President, Amanda Hazell, in achieving her vision. And with the support of our committee and members, starting to develop our vision for 2022-2024. I am especially passionate about issues relating to the access of clean water and water infrastructure for underprivileged people within Victoria and around the world. I look forward to working with our VIC branch committee and members in continuously improving our sector. Hope to catch up soon, and let’s link up on LinkedIn.” 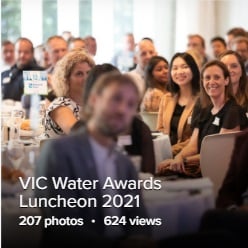 Madeleine Greenlee
What a surreal feeling it is to be back in-person in Melbourne. Nobody quite knows whether to bump elbows, shake hands, or go in… Read Full Paper

Celebrating the winners of the VIC Water Awards