The announcement of the Western Australian government’s $16.25 million contribution to the development of its State Football (soccer) Centre coincides with the release of Ideas for a Waterwise Queens Park Regional Open Space: A Sports Pitch in the Bush.

The State Football Centre will be a centre of excellence for Australia and the Indian Ocean rim, and will include training facilities and pitches to support junior and high-performance development as well as grassroots, community soccer programs.

With the announcement that Australia and New Zealand will be hosting the 2023 FIFA Women’s World Cup, the Centre will also serve as a training space for World Cup activities played in Western Australia.

Located at Queens Park Open Space (QPOS) in the City of Canning, the site’s development offers the opportunity to invest in and showcase water sensitive design to an international audience, reinforcing Perth’s position as a leading water-wise city.

In conjunction with the development of the State Football Centre, the City of Canning and the Department of Local Government, Sport and Cultural Industries (DLGSC) have developed a masterplan for the area surrounding the centre, which will enhance the remainder of the QPOS.

QPOS is a large open-space renewal project that will accommodate the State Football Centre, natural vegetation areas and enhancement of bushland and open spaces for the local community of Canning to enjoy.

To meet the needs of local residents, visiting community sports clubs and high-performance sports teams, the site must provide a variety of high-quality environments, and water security will be paramount to ensuring this outcome.

“The City of Canning is quite progressive. They've got a whole lot of really good water-sensitive urban design already. They're what we would call leaders in Perth in terms of local governments who are doing great work with water,” he said.

“City of Canning is running community engagement at the moment around tree canopy targets and livability; the State Football Centre is part of a much bigger livability project within Perth and the CRC's involvement has been one small cog in what is a much bigger planning operation.”

Ewert said the CRCWSC is always looking for opportunities to assist by applying research to real-world projects, and the QPOS project was no exception.

“We have a number of partners across Australia — 80 or so in total — including the City of Canning and various government agencies in Western Australia. Our aim is to apply water research effectively,” he said.

“We were engaged by DLGSC, the department managing the process and responsible for the project. We assisted by running a research synthesis process, helping to identify key water sensitivity targets for the site, and stimulate discussion and collaboration.”

The water-sensitive strategy proposed to the government was threefold, Ewert said, with the CRCWSC response focusing on water efficiency in terms of the buildings used, as well as irrigation; using the nearby sewer plant as a resources; and using water-sensitive urban design to make sure stormwater stays on site to recharge groundwater aquifers.

“Perth has always been a leader, Australia-wide, in water recycling, including potable reuse. They're streaks ahead of everybody else. The CRC's role was to assist with identifying the right people and organisations needed to help plan the site in accordance with best-practice.

“It's a really important project; it’s a high-profile sports ground, it's going to accommodate some of the world best football players in the preparations for world cup fixtures. It has to stay green and the grounds need to be high quality.”

One of the ideas presented to the project team has been incorporating water-sensitive urban design in terms of stormwater harvesting.

“There's not a lot of stormwater in Perth, but when it does rain you want to make the most of that resource,” he said.

“The site sits at the top of one of Water Corporation's drainage catchments. If stormwater is captured there, it’s not affecting anybody downstream. It would actually likely be beneficial for the Canning River, as it would help manage runoff.”

The WA Government and the Australian Government have each committed $16.25 million to develop the centre, which will contain two soccer pitches for high-performance, junior and community football programs.

Water Source
National Water Week is well underway, and from site tours to school visits, members of the water sector have been doing their part… Read Full Paper 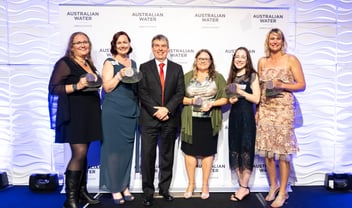