A landmark Infrastructure Australia report has urged sweeping reforms in both metropolitan and regional water markets, including greater privatisation and more efficient markets.

“Subject to robust, independent regulation there is no longer a case for public ownership and operation of metropolitan water utilities in Australia,” the report states.

Although recognising the progress that has been made in the past two decades via COAG and the National Water Initiative in metropolitan water reform, the report found the water utilities in many Australian cities were still subject to government interventions inconsistent with the enduring policy reform principles.

As well as allowing prices to be distorted for political gain, the current situation can also limit the roll-out of new infrastructure.

“Replacing public sector financing with private investment will promote innovation, boost productivity and result in a more customer-focused service,” the report stated, calling for the reforms to be made within five years.

The report has also urged greater scale to be deployed across regional water suppliers.

“Local water utilities are often forced to compromise the quality and reliability of services, resulting in water quality in some regional areas routinely failing to meet accepted standards,” it stated.

“This challenge is particularly acute in smaller communities where the limited scale of operations and low population densities reduces the capacity of providers to meet minimum service standards.”

The report found the problem was most acute in NSW and Queensland, with the latter featuring 34 councils supplying water to fewer than 1000 people.

The report has recommended the Australian Drinking Water Guidelines minimum standards become mandatory in all regional communities, which could be facilitated by considering shared services, council amalgamations or transferring water operations to regional water corporations or the private sector.

Although the report praised the progress made in bringing efficient water markets to the Murray-Darling Basin, it also raised fears of that work being undone.

“Further work is required to identify and communicate the benefits of water trade, partly to build support for further reforms, but also to safe-guard against governments overturning their earlier commitments – for example, recent calls for the re-introduction of water trade barriers to protect some industries,” the report stated.

“While river systems are less connected in the north, and unlikely to experience water trading at a scale similar to the Murray-Darling Basin, there are still benefits from secure, tradeable water rights in priority northern catchments.”

The full report and supporting documents can be viewed here.

To read the Association’s media release on the Australian Infrastructure Plan click here. 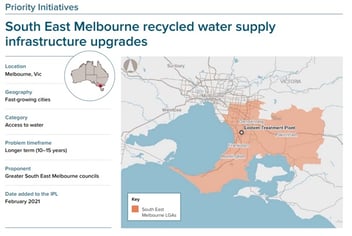