The project will irrigate nine recreational facilities with recycled effluent in the southern NSW town long plagued by drought.

Six local sporting fields, a golf course, a park and a recreation area will all be irrigated with recycled sewage as part of an $8.8 million plan to future-proof the city that has suffered from decades of water scarcity.

Construction on the project began in late December, while the detailed design is expected to be completed in March. Work includes the construction of a citywide network of water infrastructure to connect seven designated sport and recreation facilities to a safe and sustainable recycled effluent supply for irrigation purposes.

Marina Hollands, utilities director at Goulburn Mulwaree Council, said that it has engaged consultants at Cardno to complete the detailed design of the reuse system.

“This includes the reticulation mains for the system and on-site storage and irrigation systems for the individual sites. They are also preparing the reuse management system that is essential for the operation of the reuse system,” she told Water Source.

“The design scope also includes the integration to the treatment plant and the provision of a pump station to pump the effluent through the system.”

The project is jointly funded by the Goulburn Mulwaree Council and the Australian Government’s Building Better Regions Fund. Goulburn suffered greatly during the millennium drought, with residents stuck on level-five water restrictions for almost three years.

“An upgrade of the Goulburn Wastewater Treatment Plant was completed in 2018 at a cost of approximately $33 million. This plant replaced a former trickling filter plant constructed in 1915,” Hollands added.

“The treatment plant is an IDAL plant with membrane filtration and UV disinfection. This plant treats the effluent to a standard suitable for environmental discharge as well as for the irrigation of sporting fields, and parks.

“The quality of the effluent is also suitable for some industrial uses. Like many other inland cities, Goulburn is a city that experiences periodical drought. The aim of the scheme is to reduce the demand on our potable water with the irrigation of a number of recreational facilities with highly treated effluent.”

Hollands said that the expected demand for the sporting fields is expected to be 1.14 ML/day, with an additional demand of 2.16 ML/day for other sites in town.

“The Goulburn WWTP currently produces 5.5 ML/day of reuse water that will cover the predicted initial use. The volume of water produced will be dictated by the amount of sewage entering the plant and being treated.

“Excess effluent produced will be discharged into the nearby river as part of Council’s Environmental Protection Licence. As the growth of Goulburn continues, the scheme may be extended to additional areas.”

The system has the capacity for future expansion for industrial use, creating the potential to attract high demand water industries to Goulburn, opening up a new stream of economic development.

“The treatment plant is designed for around 30,000 EP and has the provision to be upgraded to 40,000 EP. As Goulburn continues to grow, effluent production will increase,” Holland said.

Two of the sites are existing irrigated spaces that will be improved through the project, which is expected to create much-needed construction jobs in the region. 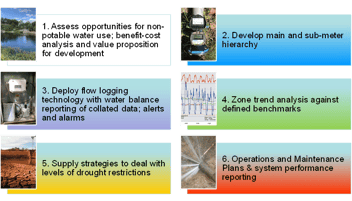