Entire irrigation board resigns after concerns over company operations

Following a vote of no confidence in Murray Irrigation Limited (MIL) Directors, the company’s Board Chairman Bruce Simpson announced all of its Board directors have agreed to resign at the annual general meeting in November.

The irrigation equipment supply company’s directors, Chris Brooks and James Sides, have agreed with the poor condition of company moral, which Simpson told Utility Magazine is the reason for the mass exit.

"The five directors who took that vote of no confidence have put their shareholder responsibilities first and foremost, and have taken the unprecedented step to end the bitterness that continues to simmer among some of the shareholder base," Simpson said.

‘‘Their decision was supported by current board member James Sides, who was not successful in being re-elected to the board, and Chris Brooks, who also agreed to resign.

“Waander van Beek and Phil Snowden, who were recently elected, have shown an extraordinary level of courage and commitment by also offering to resign.”

Simpson said the decision will have no impact on management or the operations of the company. There is expected to be an interim governance structure following the resignations.

“An interim governance structure is critical to ensure an appropriate level of company oversight. That advice will also determine when an election of directors should be held and in what format,” he said.

New candidates will be subject to rigorous assessment by an independent selection company, and the new Board is likely to include shareholder directors and three independents.

“The CEO’s position will become a managing director appointment subject to a change in the company’s constitution,” Simpson said.

“No one knows more about the business than its most senior manager, and as such it is important for that position to have an equal voice at the board table.”

New AWA Board of Directors to take office next May 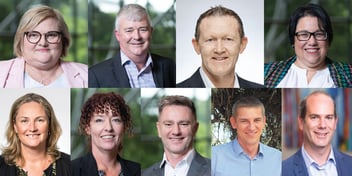