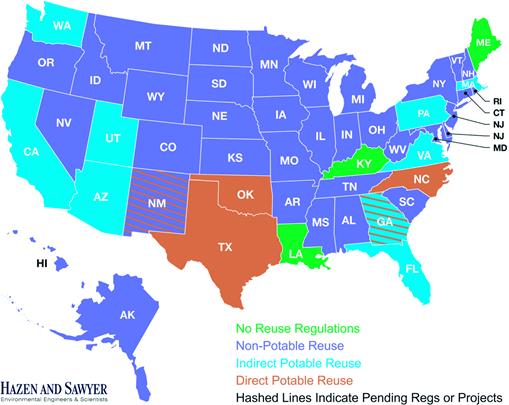 Australian water professionals recently had the opportunity to tune into a webinar presented by Troy Walker on advancements in Direct and Indirect Potable Reuse across the United States.

Troy, originally from Sydney, is the Water Reuse Practice Leader and Membrane Treatment Service Group Leader for Hazen and Sawyer, and is based in Arizona.

The webinar provided a great platform for participants to hear first-hand Troy’s thoughts and experiences with direct and indirect reuse, and understand in detail the drivers behind the various schemes being progressed in the United States, and the differences that exist between each State's approvals and requirements for treatment validation.

The ‘drivers’ section of the webinar enabled participants to understand in depth the reasons behind the advancement of so many direct and indirect schemes, and consider for themselves the current context surrounding direct and indirect reuse in Australia.

Whilst it was obvious that many of the drivers behind reuse schemes in both the United States and Australia are quite similar e.g. (drought, climate change, population growth, seawater intrusion and groundwater depletion), it was also apparent that the longevity of some of their schemes, and commitment to public outreach and education around potable reuse was helping to win public approval.

Also of interest was the discussion around nutrient management being a strong driver for reuse schemes, particularly on the coastal areas of Florida and Virginia. Reuse schemes are being progressed at these locations to improve water quality and protect coral reefs, and it has shown that the advancement of reuse schemes is not only strong in the more arid sections of the United States, but also in some wetter sections of the country where nutrient management is a key priority.

Troy concluded the webinar by stating that potable reuse is rapidly being seen as a viable option in a number of locations, and that even though the drought in the west of the United States has eased, work continues on multiple projects.

Water Source
The verdict is in: potable reuse is safe, cost-effective and sustainable. But while Perth and many communities around the world are… Read Full Paper