The verdict is in: potable reuse is safe, cost-effective and sustainable. But while Perth and many communities around the world are now in full swing when it comes to recycling water, Australia is still stalling and one expert says it’s time to focus on wider adoption.

“Many countries are facing water shortages. Climate change is here and with population increase and industrial growth there is huge pressure on our water supplies,” he said.

“Communities are now realising they already have potable reuse occurring, in that we all live downstream of somebody else. Potable use is here already and is happening across our country.

“But there is now a growing awareness that there is another alternative, one we now know is very safe: planned potable reuse. We have the technology and monitoring tools to prove it’s safe. It is also more sustainable, in terms of cost, energy use and greenhouse gas emissions than many of the other alternatives that are being considered.”

Law said that while this growing awareness is leading to many communities world-wide turning to planned potable reuse, there are still challenges stopping wider adoption.

“There is a recognition that this is a safe and sustainable option. As such, it should be considered in the mix of how we diversify our water supply,” he said.

“But there needs to be political fortitude and leadership to get it going and that is one of the biggest issues in Australia: there is a lack of informed and focused political support. We always thought the community wouldn’t want it, but that’s not the case anymore as is being shown in the US and parts of Europe.

Convincing the community has been a big challenge. A lot of that has been due to engineers and scientists not being convincing when they interact with communities. But the other reason – and perhaps the most significant – is the lack of political will in our eastern states.

Law said that, although convincing the public has been a challenge in the past, it is no longer the case that people are not open to using recycled water.

“Perth is now employing potable reuse, Windhoek in Namibia has been doing it since 1968, there are now installations in South Africa, across the US, the UK and Europe and nobody has grown two heads yet,” Law said.

“What do people see as the risk? There is no such thing as zero risk in life and it’s about talking about risk with the community so they understand it. The challenge for utilities is to build and hold trust with their customers.

“We know we produce safe recycled water. We know it’s a sustainable option. If we are serious about sustainability, then this is a solution we should be working towards and definitely considering it in any mix of options for diversifying our water supplies.”

Hear more on the future of potable reuse:

What are the challenges of supplying recycled water?

Water Source
Population growth means an increased demand on drinking water supplies, and a greater need to use the ‘right’ water for the ‘right’… Read Full Paper 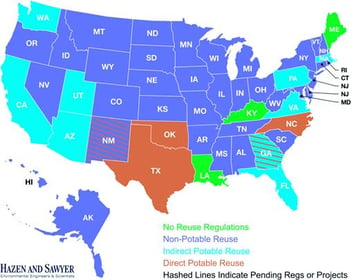