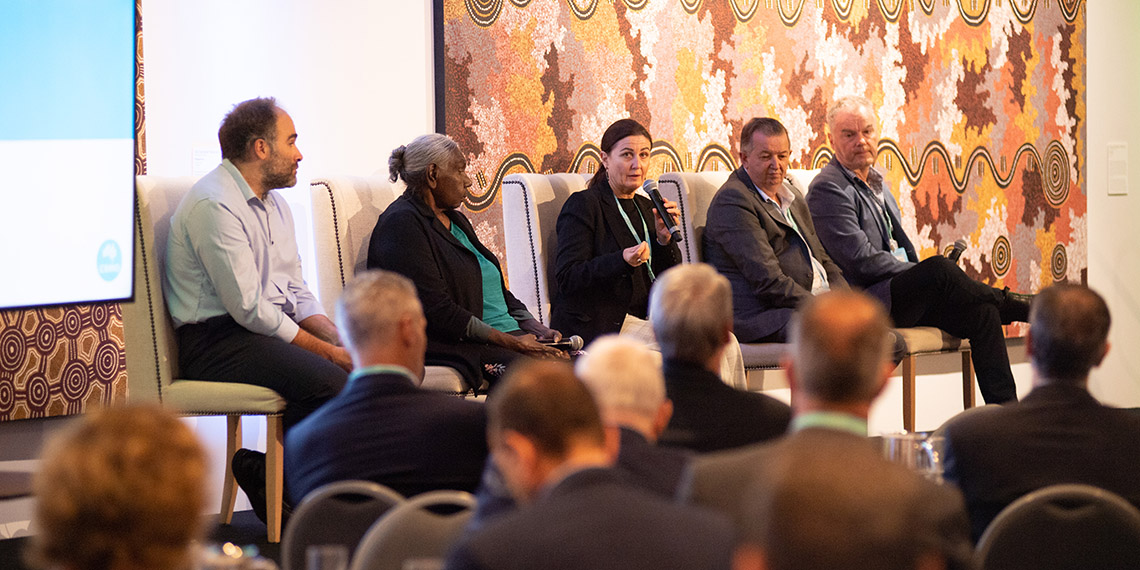 Bringing together a wide range of water leaders to discuss the future of water is always going to lead to a wide range of viewpoints. But when Ozwater’22 did just that for the Water Leaders Forum on Tuesday one common thread emerged – the need to properly and holistically value water.

The future of the water sector will be shaped by its response to pressing challenges from cyber-attacks to shifts in settlement patterns and even figuring out how water itself should be valued.

That is what some of the leading figures in Australia’s water industry heard at the Ozwater’22 Water Leaders Forum during a lively panel discussion that incorporated a rich variety of perspectives on some of the most important issues facing water and water users.

Led by a presentation from CSIRO Senior Principal Scientist — Strategy and Foresight Dr Stefan Hajkowicz, the panel considered everything from cyber-attacks to post-pandemic shifts in settlement patterns to climate change and infrastructure resilience.

“These are ongoing challenges in the water sector about how to value the benefits of water, so that we can justify investment decisions and get the right infrastructure built in the right place in the right ways,” Hajkowicz said.

That question concerned not only what the value of water is, but what considerations go into determining it and whose perspective is incorporated: how to make decisions that are transparent, affordable, and balance multiple objectives in water systems.

“Study after study has shown how beneficial water is to human beings in non-financial terms,” Hajkowicz said.

“[There are] Indigenous cultural values, we have all sorts of values attached to the water assets that we use that cannot be priced and cannot have a dollar value on it …. there are the criteria about quality of life, or ecosystem values and so forth, which start to help us make a better decision.”

Thinking beyond the economic

Healthy Land and Water CEO Julie McLellan said it was important to begin to quantify how we value water assets.

“I think we need to start investing in that additional value that our environment brings to us,” McLellan said.

“Let's look at it as a piece of kit that we can start to value, but also … it is absolutely spiritually and culturally valuable. You can't put a price on that — you should but we can’t. We need to start accepting that some of these things are valuable: the benefits are lifestyle, health and wellbeing.”

In balancing the trade-offs involved in valuing water beyond economic considerations, Aboriginal artist and educator, Dr Miriam Rose Ungunmerr Baumann, the 2021 Senior Australian of the Year and founder of the Miriam Rose Foundation, urged water users to listen to Aboriginal peoples.

“It’s easy for me to say listen to us and us listen to you, but we need to connect as well,” she said. “It’s not enough for us to get to know each other better, which is why I invite people to come and sit on Country with us as often as they can.”

McLellan echoed the value of listening to Indigenous sources of knowledge.

”We are starting to sit down with those communities and actually listen to what they've known for 60,000 years,” she said. “We work really closely with communities — not to ask them permission but to work out as to how we learn from them.”

Bryan Ward, CEO, Irrigation Australia emphasised the extent to which choices about water use and value would affect lives in coming decades.

“The World Bank has estimated that by 2050 — which is in 28 years —the population will increase by about 2.1 billion people to 10 billion. Now, put that in the context of how do we feed those 10 billion people when we’re not doing a great job of feeding the 7.9 billion that we have now,” he said.

“And additionally, we have about 800-plus million people who don't have access to safe drinking water.”

In that context, he said, water’s use for irrigation was of growing importance.

“The World Bank has estimated that agricultural production would need to increase by 70 per cent by 2050 to cope with that increased population,” he said.

Rio Tinto Global Water Leader Scott Diggles also underlined the economic importance of water use, saying that water will play a fundamental role in helping create the materials needed to drive the decarbonisation of the economy.

“The nexus is that water is an intrinsic part of those operations and the value of water is something which we’ve been trying to put into business evaluations for many, many years.”

According to Hajkowic, longstanding challenges in the future of water remain unresolved, particularly regarding climate change.

“We are in for some of the largest shocks of climate change — two degrees and above is the likely scenario for the future,” Hajkowicz warned.

“That's the chilling reality that we have to work with, which has created the adaptability challenge. It also creates uncertainty.”

That means, Hajkowicz said, that disasters such as floods and droughts would not just be more likely, they would also be less predictable. Australia’s rainfall would be increasingly variable, extreme heat would be more common, and floods would be more frequent and more severe.

“There will still be droughts, but there'll be periods of intense rainfall and drought together,” he said. “There's no clear statistical forecasting that we need.”