US researchers have been working on a new kind of water purifier that uses sunlight and water to produce a powerful and common antiseptic, with hopes of developing an efficient water purification device – the solar purifier.

With experiment results published in Advanced Energy Material, Stanford University engineers have created a variant on solar-energy water splitting to produce hydrogen peroxide, or H2O2, which works within the solar purifier to produce clean water.

The solar purifier is a variant on a photoelectrochemical (PEC) systems, which have been studied for their ability to convert sunlight to fuel and other useful chemicals, like hydrogen and oxygen.

"We think that this is a new direction in PEC water splitting, which usually requires additional energy inputs to work," Zheng said.

Both actions turn the water into hydrogen peroxide, forming the purifying compound at both electrodes.

Postdoctoral Research Fellow Feifei Shi said the real benefit of the system is that it can be used to purify water in situations where energy is not readily available.

"Ours is an unassisted system. It requires zero energy input and only light, water and oxygen to work. Water is the 'fuel' of our system. In fact, it works with tap water,” Shi said.

The researchers consider the results of the experiment as a proof of concept, but say there is still a lot of work to be done before hydrogen peroxide-producing purifiers can become commonplace.

Water purification for remote communities within reach with new device 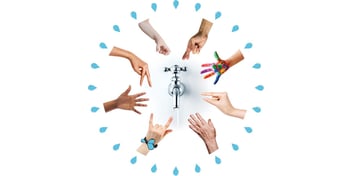