Helping the dairy industry make better use of water resources

Researching more efficient use of water and wastewater in the dairy industry has been the recent focus of Monash chemical engineering student Tom Stevenson, thanks to Gardiner Dairy Foundation and the Monash Industry Team Initiative (MITI) Dairy Program.

Starting at Burra Foods, Stevenson said the aim was to help the dairy company devise a water resources strategy, one which would create a system where the factory could reuse recycled water for different applications, from highest to lowest quality water.

“When I first came in, they got their basic water bill at the end of each month, but there were some gaps in understanding where the water was being used across the factory and which part of the factory used the highest quantities of water,” he said.

“We started on quite a basic level; finding out which parts of the plant were using the most water and taking a look at water quality specifications that were required for the different areas of the factory.

“If water was being used for products, that obviously had to be of a high quality. Whereas water for cleaning or servicing could utilise recycled water.”

“We had to use data that was available on site. We used flow meters and tank levels to get an idea of how water was being used. We used estimated flow rates to measure how much water was coming in and out of each area of the factory,” he said.

“While we didn’t land on any definitive answers, we still ended up with a better idea of how water was being utilised — much better than when we started out.

“Burra Foods used on-site ultrafiltration and reverse osmosis, so they were already doing a lot with water recycling and had an idea of how much water they were recycling, but we helped them measure that amount relative to the total amount of water they were using.”

“The water we focused on was dairy washdown water — the water used to clean the milking stalls, which are full of manure. Ideally, this water could be reused, and if not, then at least treated before it’s released back into the environment,” he said.

“We trialed coagulants and flocculants, looking for a few different variables, including turbidity of the water. We also tested the pH and electrical conductivity of the water, as well. We tested different concentrations at different times.

“We found that we had 95% turbidity reduction using poly ferric sulfate, which is a pretty good result.”

Stevenson said the Ellinbank farm is one of the most cutting-edge farms in Victoria, which was the right place for trialling different approaches to water recycling in the industry.

“Ellinbank is similar to most farms, but they trial a lot of new technology there, it’s one of the most cutting-edge farms in Victoria. They are also aiming to be the world’s first carbon-neutral dairy farm,” he said.

“They trial what works and what doesn't, in terms of new technology and the environment, and then demonstrate successful uses to farmers.” 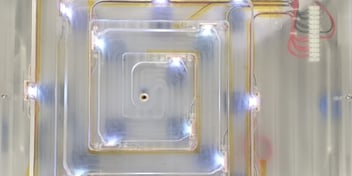 Water Source
Researchers from the University of Bath have developed a new technology for removing micropollutants from wastewater, promising a… Read Full Paper

Embedding sustainability into our organisations

Natalie Muir
From 'Transforming our World' to 'SDGs in our Backyard' and now 'Thirst for Action', the focus on sustainability in the water… Read Full Paper
Advertising