After launching at Ozwater’18 last year, Watertight Robotics is back with a new generation of robots that are making tank cleaning easier and cheaper.

Traditional methods of cleaning potable water storages – draining or diving into the tank – can waste water and often require system changes that result in bursts or discoloured water being delivered to customers.

Sending a diver into a tank can also be risky and expensive. It was this safety aspect that Watertight Robotics Commercial Manager Antony Old said encouraged the company to invest significant time and money into developing a robotic solution.

“Ultimately, we wanted to eliminate human entry and reduce the risk, cost and water consumption for our clients during tank cleaning,” Old said.

The robots, which are either oil-less or use very small amounts of double sealed, food-grade oil, have been built specifically for use in potable water. They don’t have any thrusters, which means no turbidity, and they are driven by an operator in a support truck using a PlayStation controller.

The robots are controlled by a technician in a support truck.

Old said the initial response from water utilities to Watertight Robotics’ products was a mixture of excitement and disbelief that the robots could really do what the company claimed.

“Utilities in the eastern states had done robotic trials previously, so they were rightfully sceptical,” he said.

“There are machines you can buy off the shelf that claim to be able to do what ours can … But none of them can actually do what you need them to.

“With enough tenacity, backing from clients and a whole lot of research and development, we’ve been able to create what no one else has.”

Watertight has since worked with utilities including Icon Water, Hunter Water and Water Corporation, and has spent the past 12 months perfecting its product.

A robot in action.

It won the WA Work Safety Awards 2018 Safety and Health Invention of the Year and is a finalist in the Industry Safety Excellence category at the Australian Water Awards, which will be announced at Ozwater’19 in Melbourne next month.

“Every time we execute a cleaning program we assess it. We look at what worked and what didn’t, and we keep building and rebuilding the product to make it more efficient,” Old said.

“This new generation of robots we’ve created … is the Holy Grail of tank cleaning: they’re online, they don’t create any turbidity, no one is going into the tank and there are no system changes being done.”

To learn more about Watertight Robotics, visit them on the exhibition floor at Ozwater’19. 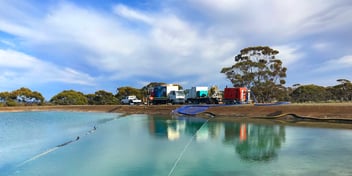 Water Source
Cleaning drinking water systems can be expensive, time consuming and an OH&S concern for many utilities, but one company has turned… Read Full Paper