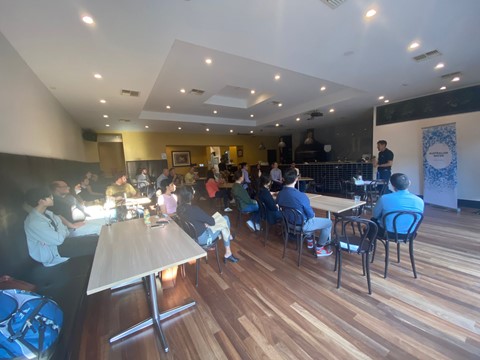 Space, water and technology were the three words that attracted a big crowd on the day of the last SA Sundowner for 2021. With a new spacious venue at the King’s Head, Matt Lama delivered an engaging and interactive talk for South Australian young water professionals.

Matt is the Delivery Manager at Fleet Space Technologies, a South Australian space company in the business of “connecting everything”. With a fleet of nanosatellites, Fleet Space is helping multiple industries with remote connectivity issues where the satellites can pick up information from an in-situ installation that includes sensors, a portal and a modem.

By showing the audience the different elements in their communication system and the evolution of Fleet Space’s portal, Matt was able to not only explain what for most of the attendees could have been “rocket science”, but also provided us with a wonderful lesson: nothing works in the first run but the key of success is to keep trying and not giving up.

After a crash course on remote sensing, Matt shared two different applications of Fleet Space’s technology in the water industry. The first example was the “Cooling Adelaide” project, an initiative led by SA Water and supported by the local government to improve the visibility of council irrigation practices. Their role in this project was to deploy more than 200 soil moisture and temperature sensors to track the effect of irrigation in green spaces. In addition to providing the community with temperature data of their favourite parklands, this project highlighted the importance of irrigation in large green spaces such as Adelaide Airport, where a decrease in three degrees through irrigation could translate into important plane fuel savings.

The second project involved the remote monitoring of hydropower assets. In remote areas of Australia, where terrestrial connection to retrieve information from sensors is extremely difficult, Fleet has deployed soil moisture and water flow sensors orientated to monitor if existing assets are presenting with large water losses. Considering that excessive water losses translate into revenue losses on a hydropower project, the importance and impact that Fleet Space is having in the water industry is evident.

At the end of his talk, Matt included some insights into the future of Fleet Space. Their ultimate goal is to connect the Earth to Mars for resource exploration. They are currently working on a seismic sensors network that would be able to predict the soil composition from seismic waves and one day, maybe, find water in the red planet.

With this magnificent sundowner, which also included prizes for the best questions, the SA YWP committee closed the 2021 sundowner series. The event will come back in February 2022 to provide the SA water industry with more interesting and engaging talks and to open a space for informal networking.