Queensland celebrates the best of the water sector!

The Queensland water sector came out in great numbers to celebrate its highest achievers at the AWA QLD Gala Dinner and Awards Night on Friday, 9 September! It was fantastic to be part of such a special night for all the finalists and winners and to see members cheering on their colleagues and celebrating the tremendous work done across Queensland.

Winners of the Queensland Awards are profiled on the AWA website, and you can view all the photos of the celebrations in our photo gallery.

The Queensland Branch received nominations from 32 people and organisations for this year's awards. The Judging Chair, Dr Nicole Davis, said the quality of nominations 'was of an extremely high standard, with very close scores in several categories'.

The Queensland winners now go on to compete at the National Water Awards, to be announced during Ozwater'23.

During the Gala Dinner, AWA Board Member Dr Sandra Hall paid tribute to our friend and water leader, Mark Pascoe, to recognise his significant contribution to AWA and the water sector in Queensland, Australia, and internationally. And she also launched AWA's anniversary video celebrating 60 years of history. Watch it here if you missed it.

The Queensland President, Margit Connellan, took the opportunity to recognise recent members of the QLD Branch Committee for their service to AWA: Lisa Welsh, David Merrett, Narelle D'Amico, King Intrapaiboon, Richard Savage, and acknowledge the contribution of Dr Nicole Davis as Immediate Past President, who remains on the QLD Committee for the next two years. Margit also presented Peter Zemek with his 30-year membership pin, recognising his ongoing involvement and support of AWA.

Thank you to our sponsors who helped make the event such a success:

If you or your organisation were not a part of the awards this year, we hope you'll be inspired to submit a nomination next year and join the honour roll of those driving a sustainable water future.

Highlights from the Ozwater'19 Gala Dinner 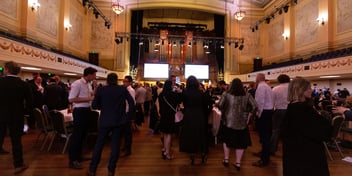