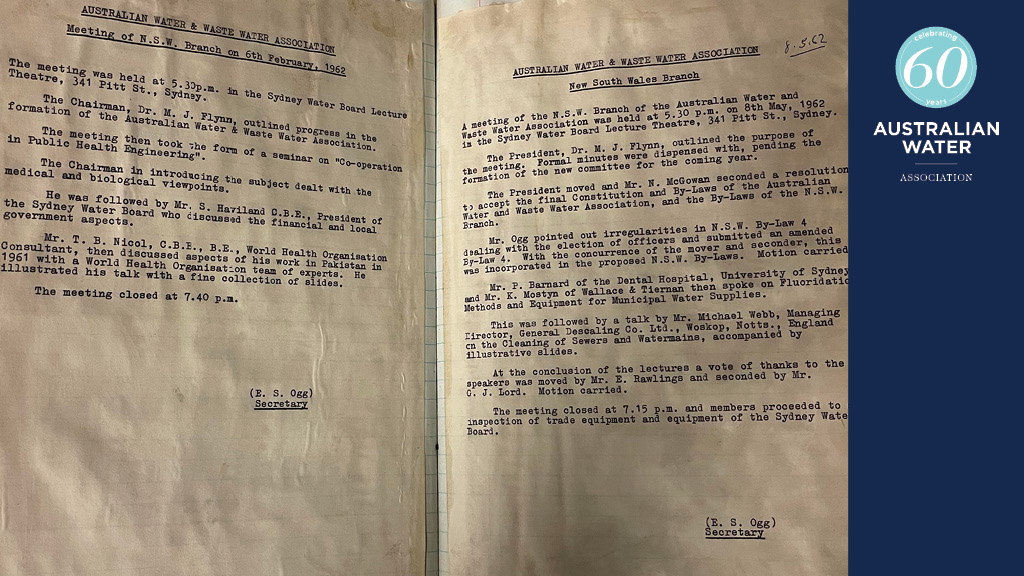 An excerpt from the Australian Water and Wastewater Association New South Wales Minutes.

There were ninety-one present, including representatives of Government and Semi-Government, Local Government Bodies, the Universities, and trade interests.

The Chairman, Dr. M. J. Flynn, explained the purpose of the meeting, the support for it, then outlined the history of the development of the Association.

Mr. H. G. Sweet, Engineer-in-Chief, on behalf of the Board welcomed the visitors the meeting.

The Chairman read the Memorandum and By-laws, whereupon the meeting resolved that the Melbourne Drafting Committee be informed of its comments as follows:-

Clause 1. The name of the organisation shall be the Australian Water and Sewage Treatment Association.

Clause 6(d). "The Council shall appoint annually a Vice President and a Secretary-Treasurer."

Clause 11. Add "After a plebiscite of members" before the words "the Association may affiliate".

There was some discussion of 5(d), certain members feeling that the word "associates" should be replaced by the words "affiliated members", but the meeting resolved that the Membership Clauses were satisfactory and did not need alteration.

The meeting resolved on the motion of Mr. H. G. Sweet, seconded by Mr. B. Andrews, that the Australian Water and Sewage Treatment Association should be formed and that a New South Wales Branch thereof also be formed.

The meeting resolved on the motion of Mr. G. D. Aiken, seconded by Mr. M. Kline, that there be formed immediately a provisional committee of the New South Wales Branch as follows:-

The meeting resolved on the motion of Mr. N. McGowan, seconded by Mr. G. J. Lord, that the Convener, Dr. M. J. Flynn, should be authorised to forward to the Melbourne Drafting Committee a summary of the comments expressed and resolutions passed at this meeting.

Matthew Schnelle
Since joining Sydney Water’s graduate program in 2016, Ronica Koey has established herself as someone with a passion for… Read Full Paper

Water Source
After winning WaterAid’s global 2018 Winnovators Challenge, Sydney Water’s Team Praan were off to India for the experience of a… Read Full Paper