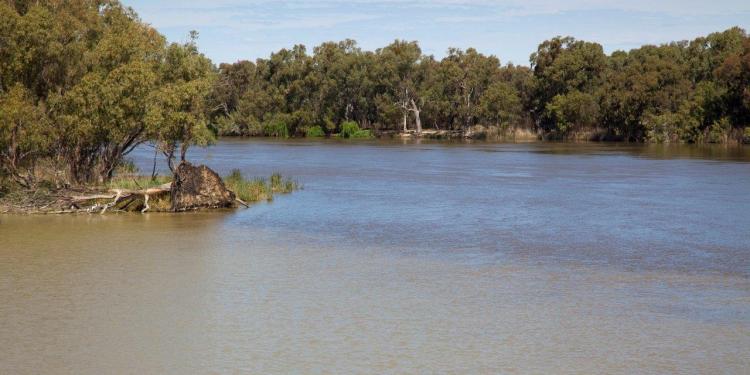 A 200-year-old sediment bank is disrupting water flow in a key part of the Murray River.

A report by Murray–Darling Basin Authority (MDBA) has found a surprising cause of decreasing capacity in a key part of the Murray River.

A massive "sand slug" that is believed to be accumulating in the Murray River as the result of gold mining practices in the 19th and early 20th centuries has been slowly moving downstream — and is now accumulating in the river's narrowest stretch, an area known as Barmah Choke in southern New South Wales.

MDBA Executive Director River Management, Andrew Reynolds, said the findings highlighted the complexity of managing the river to keep it healthy and sustainable.

"We set out to investigate the possible causes of that decrease in capacity, and what we found was quite incredible. A survey of a 28 kilometre stretch of river revealed that, for every kilometre of river length, 84,000 cubic metres — or 112,000 tonnes — of sediment was estimated to be on the bed. That's more than 3 million tonnes just in the area we surveyed.”

Local landholders had long blamed excessive flows under the Basin Plan for eroding the banks and clogging Barmah Choke.

"This coarse sandy sediment has a very different profile and composition to the surrounding river banks, so it's pretty clear that it's not caused by local erosion, and in this part of the river it's averaging more than 1 metre deep—with some areas over 4 metres deep,” he said.

To understand where it came from and how it got there, the MDBA engaged independent experts who looked at a range of hypotheses, including flooding, historical desnagging and regulation of the river system.

“Our analysis found that the most likely explanation is that land-use changes — in particular gold-mining and land clearing — were responsible for introducing large volumes of sediment to the River Murray over a short period of time,” Reynolds said.

"During the gold rush, river channels were used to 'process' huge volumes of sediment, with the gold dropping out into cradles and sluice boxes. This would have introduced a large pulse of sediment — known as a 'sediment slug' — to the river system.”

Managing the Barmah Choke has long plagued water authorities. The section is naturally narrow, meaning it is difficult to get water to where it's needed, which increases the risk of shortfalls. Only 20 GL of water can be traded from upstream to downstream of the Barmah Choke this water year, because of its restricted capacity.

Reynolds said that more work needs to be done by the authority to understand the complex problem.

"The challenge for basin governments and communities is how to deal with this through such an ecologically and culturally important forest. Obviously you can't just rashly start dredging the river,” he said.

"As an independent science-based organisation, what we do must be based on evidence. The ecological, economic and community implications of any course of action will be carefully considered, along with input from First Nations peoples.”

The MDBA will be consulting with key stakeholder groups on capacity issues and shortfall risks in the near future.

"We also need to properly understand the longer-term rate of sand build-up and associated loss of channel capacity. As directed by Basin Ministers, we will also be undertaking a feasibility study looking into ways to take pressure off the Barmah Choke, to support system capacity and reduce the risk of shortfalls in water delivery,” Reynolds said.

"These findings go to show the complexity of restoring the balance in the river system. In managing the river, we are still seeing the impacts of legacy issues from almost 200 years ago. Ensuring a sustainable future for the river is a mammoth undertaking, and it is not something that can happen overnight.”

What can we expect in the Murray-Darling Basin this summer?