Building resilience in our regions

At a time of increased climate variability, and as the current drought wreaks havoc across parts of the country, managing the health, livability, and sustainable growth of our regional centres is critical to Australia’s immediate future.

According to the Australian Bureau of Meteorology, this autumn has been the fourth-warmest on record in Australia with below average rainfall across most of the country.

Fiona Chandler, Townsville Regional Manager for Alluvium Consulting, believes that the challenge of building water resilience in these circumstances is felt more acutely in regional areas.

“The smaller the community, the more potentially vulnerable they are to multiple stresses. Really big concerns tend to be cumulative; the water issue alone potentially might not have been as big if the city was feeling more socially and economically resilient,” she said.

“There will often be criticism, particularly around infrastructure decisions that involve large sums of money. In south-east Queensland, there was some backlash after building for desalination plants only to be hit by a flood.

“The design of our governments and institutions might need to shift. We like to compartmentalise, but we need to think about the different roles involved in planning.”

Chandler said there is value in promoting infrastructure as part of the broader narrative of quality of life, and helping communities understand that the consequences of inaction can be as critical as cost-versus-benefit.

“There has a been huge improvement in community engagement and integrated decision making, but the question is now what we are engaging about, and are we asking the right questions of the community?”

In a region encompassing Greater Newcastle, as well as the coastal Hunter, there are competing demands for water, including mines, agriculture, power stations, and urban users – on top of a projected population increase of 25% over the next 20 years.

For Berry, water resilience means adaptive capacity combined with robustness, and the risk of failing to address it has broad implications.

“Businesses want confidence in long-term regional planning, including water security, before they invest,” she said.

“Drought has significant impacts on water-dependant industries, and even small businesses like landscaping and car washing.”

The social impact of drought cannot be overlooked, either. “We’ve learnt through the Millennium Drought that water restrictions have broad impacts across our communities: dry playing fields increase sporting injuries like broken arms, and there can be a general decrease in people’s wellbeing as a result of less access to green space,” she said.

Berry said the water crisis in Cape Town, South Africa, points to just how high the stakes are in terms of water management for urban centres.

“It has provided context for us – 50 litres per person per day is not very much,” she said.

Thankfully, Australia is not facing a Cape Town-style crisis – but we can never be complacent, particularly when it comes to the connection between regional drought and urban water security planning.

“The water pipeline connection between the Central Coast and Lower Hunter region is a good example,” Berry said.

“This physical connection enables us to direct water where it is most needed during dry periods, as well as provide operational flexibility when needed, such as maintaining continuity of supply during breaks or outages.”

Celeste Morgan, project leader at CRC for Water Sensitive Cities, said that there are opportunities to connect between rural and urban water needs through integrated water management.

“Urban areas, including regional cities and towns, are actually generators of water,” she said. “They have ‘excess’ water in the form of treated wastewater and urban stormwater which can be harnessed to supply both urban and rural water needs. This is more than just a water supply driver—it’s one which is essential to the environment.

“There is a wealth of knowledge on how both pollutants and flow patterns from urban stormwater and treated wastewater inflows are detrimentally impacting waterways downstream of urban areas.

“By harnessing urban water as a resource, we can create a sustainable urban water cycle with multiple benefits. An added bonus in regional cities is that urban water can be harnessed to support peri-urban agricultural areas, supporting local economies by providing a fit-for-purpose irrigation source.”

A prime example of this is Ballarat’s Lake Wendouree, which in 2009 was completely dry and even caught fire, causing a range of social and economic impacts on the town, devastating tourism, recreation and mental health.

“Central Highlands Water and Council worked together to harness urban water sources – both recycled water and treated urban stormwater – to create a non-potable water network throughout the city that delivered water to the lake as well as key open spaces in the city,” Morgan said, a project that won a number of awards for excellence.

Dr Shahbaz Khan, Director and Representative of UNESCO’s Regional Science Bureau for Asia and the Pacific, has recently been in Australia looking at what projects such as Lake Wendouree mean for water security in urban centres.

“Institutional setup is very important,” he said. “At the highest level, we need to have the proper institutions well connected with communities. The Murray Darling Basin Authority is the standard for other countries."

In this vein, Australians are best served by thinking big. “Australia is a planet in itself, from the tropics to extremely dry areas like the Murray Darling – and still, there is so much we can learn from each other,” he said.

Khan said he believes many of the building blocks are in place to play to our strengths, but action is required.

“Australia is good at bringing experts in water and environment together, in making sure the big problems such as salinity don’t come back, and understanding the role of the local regional communities in surviving Australia,” he said.

“What Australia is missing is the level of people in cities who can link the science, local government relationships and water consumers – and how we can support these actions by providing better science.

“We need to have a network of scientists and community leaders working together across regions. In my view, Australia is now lagging behind in this area compared to countries like Malaysia and Indonesia, where we have a lot of backing from the government for the universities, who are pushing them to do this work.”

Dr Khan believes that Australia must continue to focus on leadership and evidence-based decision making.

Experts agree that councils working on projects together, outside of arbitrary regional boundaries, is critical to water security. Also critical is joining with researchers to share knowledge.

“We need to be on the same page, presenting a united front avoids duplication and finds a common voice,” said Emma Berry. “Above all, we must collaborate to have one message understood by everyone in Australia, said Dr Khan.

“Water resilience cannot be realised until we start thinking about droughts, floods, and extreme events management as part of our normal living conditions."

Water Source
With the release of the 2023 Honours List, we are delighted to see achievements for those working in water being highlighted. Chris… Read Full Paper 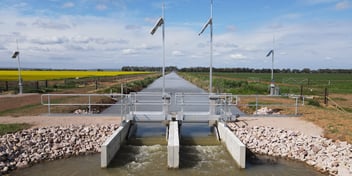