Searching for a solution to contaminated water in remote Indigenous communities

Access to safe water is an issue faced by many Indigenous Australians, and two leading experts say safe water provision in remote areas is a sustainability challenge requiring adaptive action.

“The conversation is about stewardship of essential resources,” Hall said.

“And it is more pertinent than ever to consider the people who have been caring for these resources for so many thousands of years and who now are stepping in to assist with the proper management of contaminated water.”

Referring to the Safe Water Summit held in 2018 at the University of Queensland, Hall said five key issues were raised in terms of health risks faced by Indigenous Australians living in remote communities.

“This conversation has a very simple goal: safe water for all Australians. But we know it’s a complex journey to achieve safe water,” Hall said.

“The context is familiar to us. Australia is a signatory to the SDGs. When the SDGs were launched, the UN stated: ‘We pledge that no one will be left behind. We will endeavour to reach the furthest behind first’.”

Hall said the high levels of chronic kidney disease in Indigenous people living in remote communities has led to a broader exploration of the connection between groundwater and community health.

In terms of contamination, Hall said it is highly diverse, ranging from naturally occurring chemicals, including arsenic, nitrates and uranium, to microbial contamination, which relates to water-source management and proximity to sewage and animal waste.

“We also have human induced chemical contamination from agriculture, pesticides and herbicides, as well as mining waste and PFAS contamination,” Hall said.

She said the Safe Water Summit showcased informative perspectives from a range of Indigenous representatives who spoke about different issues they had in accessing safe drinking water in their communities.

“We are operating in a changing climate. It’s not hard to move from climatic changes in the physical environment to health-related changes that the population is experiencing – that’s waterborne diseases, casualties from flooding, heat-related deaths,” Hall said.

“And this points to the need to adapt water treatment technologies for remote communities to a changing climate.”

Hall said the provision of safe water is directly linked to developmental goals, too.

“The World Health Organisation lists drinking water as one of its pre-conditions for success in everything from the fight against poverty and hunger to primary education, gender equality, women’s empowerment, child mortality rates, maternal health; the list goes on,” she said.

Hall said contamination is causing alarming rates of disease in Indigenous communities in Western Australia, where toxicity from nitrates is five times that of non-indigenous Australians.

“The rates of kidney failure are elevated 20-fold in some remote areas. This is not nothing; it is challenging, it’s a life-long disease,” she said.

Furthermore, Hall highlighted health inequity across the country: “The burden of inequity in terms of access to safe drinking water in Australia does fall disproportionately on remote areas, and these areas have a larger population of Indigenous and Torres Strait Islander people.

“As we all know, there are lots of solutions, but not every solution will be appropriate for that community.”

Mortimer said that while accessibility is a challenge in terms of researching different approaches, finding the right solution to remote water treatment that balances capital output, efficacy and waste is the biggest issue.

“We now have greater public expectation of the quality of water we are expected to provide, and that is across the board – we have all experienced that in this industry.”

“We have four RO plants set up. It’s a well-understood treatment, it does an excellent job. We have great control, but it’s also power hungry and requires quite a bit of infrastructure,” he said.

“The infrastructure for the largest plant cost about $750,000, and we are providing water to about 350 people. Another strategy we are looking at currently is capacitance deionisation.”

Mortimer said another promising and straightforward solution is fluoride removal via calcium.

“The high calcium levels react quite heavily with the fluoride, essentially irreversibly. The fluoride becomes incredibly insoluble and the human body can no longer access the fluoride following this treatment process,” he said.

“We don’t have a waste problem with this solution. Also, the infrastructure requirement is minute. Retention times might be an issue, but we are currently looking at re-circulating via a solar-powered pump.”

Mortimer said that while some approaches perform well in terms of cost and relative waste production, striking the right balance with efficacy is more of a challenge.

“Basically, there’s no silver bullet. We are still seeking our Holy Grail,” he said.

“RO is currently the most reliable technology for removing contaminants from water in remote locations. But I firmly believe capacitance deionisation the technology of the future, however it lacks maturity at this stage and requires more reliable maintenance."

There's still one day left of Ozwater'19! Don't forget you can visit the trade exhibition from 8.30am-2pm and check out the app to plan your final sessions. 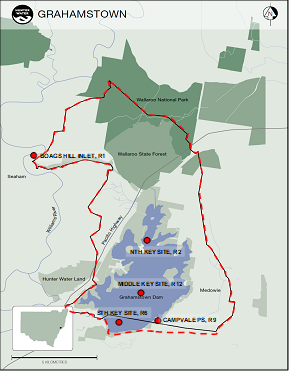 Water Source
SA Water is working to overcome the challenges of supplying safe and reliable drinking water to some of its most remote customers. Read Full Paper