What happens when you put water management in the hands of communities?

Advances in technology such as sensors, smartphones and social networks make it easier than ever for communities to care for shared resources. But what makes some community caretakers more successful than others? A pilot project conducted in northeastern Tasmania’s Ringarooma catchment might offer some clues.

Ted Lefroy, from the Tasmanian Institute of Agriculture at University of Tasmania, thinks it has a lot to do with how information is shared within those communities.

“If you look at what’s happened to water management in the Murray-Darling Basin, it’s quite evident that top-down regulation is not sufficient,” said Lefroy, who will be a speaker at the upcoming Where the Waters Meet 2018 Tasmania Annual Conference.

“What is apparent is that we can’t rely only on a top-down system of law and regulation. If you rely on that, it’s very brittle."

Lefroy said there’s growing need for collaboration between water regulators and consumers. Supply is becoming increasingly variable, and in Tasmania the government has set stretch goals for agricultural growth.

“There always has to be the law … but I think we’re beginning to realise that it can’t do it alone. There’s increasing demand [for water] and increasing uncertainty of supply,” he said.

“Those two things could be fairly disastrous if not managed well. So that’s a case for collaboration.”

Unlike the Murray-Darling Basin, for example, Tasmania is made up of many smaller catchments, which makes it easier to manage at a local level. A recent investment by the National Water Initiative, the Tasmanian Government and farmers in 10 small irrigation schemes provided the perfect opportunity for Lefroy and colleagues to test a mixed-model system – a combined top-down and bottom-up method of water management.

The team created a website that posted real-time water data for a community of about 30 irrigators in the Ringarooma catchment. Normally irrigators would receive a message from the regional water manager if the water level was reaching its cease-to-take level. But by that point, it’s often too late for irrigators to do take action.

“In this case, instead of just waiting until they get the message and worrying, we created a website and posted real-time streamflow data. And instead of just one gauging station down near the bottom of the river, there was a series of them,” Lefroy said.

However, what they found was that the 30 irrigators found their own method of operation.

“We thought – naively – that the 30 active irrigators in this small catchment would all go straight to this website and watch what was happening with their river. Only two of them ever visited the website, and only one of them acted on the data” Lefroy said.

But what that one irrigator did was relay information from the website to the other irrigators. In some cases, during low-flow periods, he visited the site hourly. That one irrigator took it upon himself to organise rosters to coordinate water extraction and stored water release.

“We thought this was a very interesting phenomenon because this group managed to coordinate their use of water,” he said.

To better understand this collaboration, Lefroy and his team sent a group of consultants down to the community to interview as many irrigators as possible and learn more about the conditions that make this kind of collaboration possible.

According to Lefroy, many of these conditions fit perfectly with Nobel-winning economist Elinor Ostrom’s study that refutes the theory of the ‘tragedy of the commons’. The theory states that any shared natural resource will eventually become degraded because no one takes personal responsibility for its maintenance. However, she found that wasn’t the case as long as some conditions were met.

Some are geographical, which can’t be altered.

Other conditions are social and institutional. For example, there needs to be common understanding of the rules, and repercussions if those rules are breached. Another is there needs to be some kind of clearly defined boundary and social sense of identity, which worked in the case of the 30 Tasmanian irrigators, who for the most part all grew up in the area and knew each other.

And there needs to be some form of leadership, such as the one irrigator who took it upon themselves to coordinate with the others.

“What we really want to do now is test two things: Is it scalable? And is it transferable?,” Lefroy said.

“Can we scale it to include vegetable growers, beef farmers, croppers, foresters … and will they similarly collaborate? Or is this a social phenomenon restricted to a group of people who know each other well?

“And the other question we want to ask is, can we go somewhere completely different and replicate it?”

This particular pilot ended in 2016, but Lefroy and his team are currently submitting applications for research grants to scale up the project in the original catchment, as well as finding a suitable catchment in the northwest corner of the state.

Lefroy said collaboration networks like this could be used in other areas of water management, such as stormwater management. He said it could also work in urban areas within precincts, local government wards or suburbs to manage communal water resources.

“If it conforms to some of Ostrom’s conditions – there’s a boundary, and there’s sufficient interest among the majority of the people to do this – then yes, maybe it could work,” Lefroy said.

Ted Lefroy will be presenting on collaborative water management at the upcoming Where the Waters Meet 2018 Tasmania Annual Conference. To learn more and to register, click here.

Cecilia Harris
The Aboriginal community of Yalata, located near the Great Australian Bight in western South Australia, will benefit from a new and… Read Full Paper

'None of us can control where the rain falls, only what we do with it': Lessons from the Southern Downs 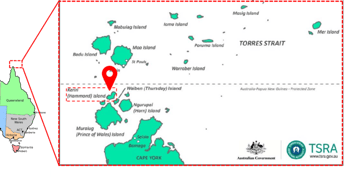 Working with community and council: The Kirirri story