Aboriginal artists have been invited by the Desart and Central Land Council to submit their works for the third Vincent Lingiari Art Award under the theme of water rights.

"The government gave us some of our land back but not the water. Water is the new land rights," Wilson said.

The $10,000 award will be accepting works that respond to the critical importance of water for the continued survival of Aboriginal peoples.

"The award has always been unashamedly political, and this year it will raise awareness of our struggle against massive water theft that threatens the survival of desert plants, animals and people and for safe drinking water for our remote communities," he said.

CLC chief executive Lesley Turner said water is critical to the social, cultural, economic and political identity of Aboriginal people in the region.

"Over almost half a century the CLC has won back significant areas of land on behalf of traditional Aboriginal land owners,” Turner said.

“But without safe, secure and adequate sources of water their very survival on this land is under threat.

"Poor water quality, water shortages, water use in fracking, and agribusiness have a detrimental impact on the health and wellbeing of our people, their Country and cultures."

Turner said the award intends to send an urgent message to appreciate water as the precious and life-giving resource that it is.

Artists from the CLC region, as well as art centres affiliated with Desart, have until 30 June to submit works that explore their connection with land and water.

The award exhibition will take place from 8 September 2021 at the Tangentyere Artists Gallery in Alice Springs. 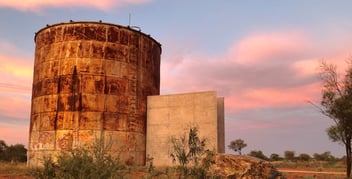 Cecilia Harris
Pictured above: The rusty derelict water tank which now houses the sound chapel. The entry is between the concrete walls, the same… Read Full Paper