Just in case anyone needed more proof that dogs are awesome, Sydney Water, Water Corporation and Urban Utilities are achieving impressive leak-location feats thanks to the noses of furry employees.

Trained to detect the scent of chlorine, Kep pointed out two specific leak locations, which were confirmed with the use of acoustic equipment, Blaire told the ABC.

"Kep — in about 10 minutes — saved us. Who knows how much water over the course of however many years those leaks might've gone undiagnosed," Blair said.

"A search of five kilometres of buried pipeline using traditional methods of acoustic detection could take weeks. She clears that at least 10 times faster," he said.

"It's definitely a lot easier to move up the pipe with the dog and let her tell you where she's getting a scent. Then we can listen directly with the probing equipment.

“We have more than 9000 kilometres of water pipes in our network and some of these pipes are located in dense bushland, so it can be difficult to detect a leak,” Schrauf said.

“Halo and Danny are trained to sniff out the chlorine in potable water and are particularly effective in bushland, where it can be hard for us to access.

“What makes them so impressive is that they are able to differentiate between water leaking from a pipe underground and all other types of water on the surface. Once the dogs detect a potential leak, we send our field crews to further investigate and repair it.”

These "dog detectives", Joey, Winnie and Ziggy, cleared 24 areas of wastewater pollution in the space seven months, as well as discovering illegal dumping of wastewater and trade waste chemicals.

Joey, who unlike Winnie and Ziggy, focuses on wastewater rather than pollution recently found his first leak — a cracked pipe in Cheltenham.

"Joey is very quick at his job, and he's trained to drop and hold position at that source of that leak," Sydney Water's Nicole Harvey told 9 News Sydney.

New South Wales Minister for Water Melinda Pavey has highlighted the importance of the job facing the canine team.

"Winnie and Ziggy are able to identify the presence of sewage in minute concentrations, even when we might think it is okay," she said.

“These highly-trained puppies will complement the existing approaches being used by our Sydney Water workforce, ensuring our water and wastewater services continue running reliably for the millions of people depending on these services every day.”

Cecilia Harris
Reducing leaks in water and wastewater networks is a sniff away, with the introduction of two hunting pedigree puppies to Sydney… Read Full Paper

Dowsing or smart technology – have your pick to locate underground water 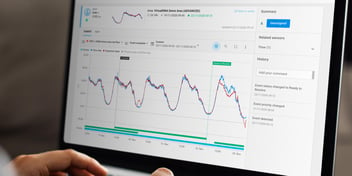