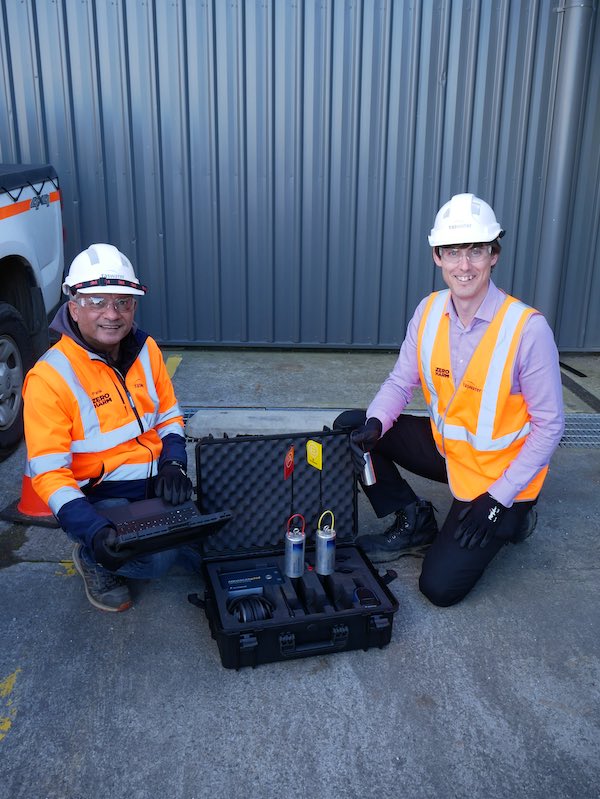 In an effort to reduce non-revenue water within its network, TasWater is implementing an active leakage management strategy using ZoneScan loggers that detect the sound of leaks underground.

TasWater Acting Department Manager Asset Strategy and Performance Matt Jordan said the utility currently has 40 of the loggers and is applying a leak detection strategy, starting in known problem areas where leaks and pipe bursts have been most prevalent.

“ZoneScans are small, deployable correlating loggers. Correlating loggers listen to nearby leaks on pipelines, and are generally installed onto hydrants or valves. As there’s a known distance between loggers, it helps us to pinpoint the location of the leak very accurately,” he said.

“We’ve currently got 40 ZoneScan loggers, but we will potentially be increasing that soon. We deploy all the loggers within a localised area. This gives us an idea of leak hotspots. We then go in with more instantaneous correlators, which helps us refine exactly where the leak is occurring.

“Finally, we use a ground microphone to confirm the leak and get the works crew to come to dig and find the leak. This process repeats from zone to zone. We install the ZoneScans in the next area and follow the same strategy.

“To date, we have been very successful in finding leaks precisely.”

Jordan said the technology is helpful in tackling non-visible leaks that are otherwise very difficult to locate and, given this difficulty, can often leak water from the network for long periods.

“Traditionally, water leaks are called in by a member of the community, or they are seen by a member of our crew. The ZoneScan system helps us to find leaks that don’t come to surface, or non-viable leaks,” he said.

“The water from these leaks usually find their way into local stormwater or the ground. These are leaks that can go on for many months. One example was a leak we found in the northern suburbs of Hobart, which was leaking a litre per second, which is about 86 kilolitres of water per day.

“There had been water running down the stormwater culvert and a local operator said this had been occurring for at least two years, but there’d been no luck finding the source.

“Within a couple of days of utilising our new ZoneScan process, we found the leak and it was pinpointed exactly.”

While TasWater has been applying the technology for about six months, it is part of other water conservation efforts and will continue to be deployed by the utility to drive down the costs of lost water.

“We’ve been using the technology for about six months now. It’s a common practice that is applied worldwide. TasWater’s non-revenue water reduction journey is relatively new. And this, in conjunction with a lot of other activities, is helping us drive down leaks in our network,” Jordan said.

“We are about to embark on measuring how much non-revenue water we are saving by using this technology. We will be going back and quantifying the volume of the leaks we have detected.

“Each year, we work on our water conservation messaging to our communities, but we have to be out there conserving water as well. We want to put our money where our mouth is and do as much as we can to drive down water losses.

“Every litre of water we save equates to less pumping and treatment costs, reducing the risk of water restrictions or providing environmental water flows back to our creeks and streams. This is really important in some of our towns that have water restrictions, particularly on the east coast of Tasmania, where we have very small catchments or water surety concerns.”

Elle Hardy
Sydney Water has its very own team of "dog detectives", and its latest recruit, Joey, is ready to hit the pipes next month. Read Full Paper
Advertising