With November being a bit late to do it in person, on behalf of the AWA Victorian Branch I would like to say a huge thank you to David Kirby as he steps down from his role as Immediate Past President and moves on from the branch committee.  His ongoing passion for supporting not only the Victorian Branch of AWA but also the broader association through his time as Victorian Branch President was a common reflection from previous and current AWA volunteers,

David has always shown a willingness and enthusiasm to putting his hand up to get a job done.  And the initiatives he has been involved in over the years have really benefitted from that, including how the Victorian Branch interacts with the other branches at a national level, setting a high standard for how the Victorian Water Awards are organised and managed, to more recently supporting the reinvigoration of the Victorian Branch newsletter.

AWA Membership Engagement Manager Digna Nichols also asked me to share ‘David has been a wealth of information for me since I started with AWA and my career in the water industry… explaining many of the acronyms our industry is well known for (!), advising me the best people to contact for various things and sharing an insider’s perspective on the water space. I just think it’s so wonderful that after so many years he is still so passionate about being involved with AWA, mentoring and supporting upcoming future water leaders and making sure we deliver a great Awards program! David is truly an AWA VIC Awards MC extra-ordinaire and very important chief-judge… bringing experts together to ensure all Award nominations are judged fairly against key criteria.

I have been impressed by his willingness to share knowledge, mentor and support those new to the committee, including myself as I took on leadership roles in the committee.  And it is all done with a smile in his own unique style, I know I have a very hard act to follow on this one.  Thankfully, for the Australian Water Association he is going to stay involved with the specialist networks, and I look forward to seeing what gets delivered through his guidance in the years to come.  Thank you David, we will miss you but looking forward to seeing you at an event in person soon!

Water Source
June to August is typically a busy time of year for AWA here in Victoria as we go through the nomination, election and induction of… Read Full Paper

Martin Kovacs
Mentors and mentees can take time to click at first, however, working together to create open and reciprocal channels of… Read Full Paper 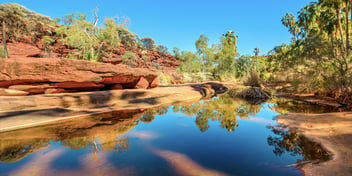 A message from our outgoing AWA NT Branch President

Christina Bruno
Wow, what a year! This year has flown by and we have been a busy committee here in the NT! Christmas is just around the corner and… Read Full Paper
Advertising