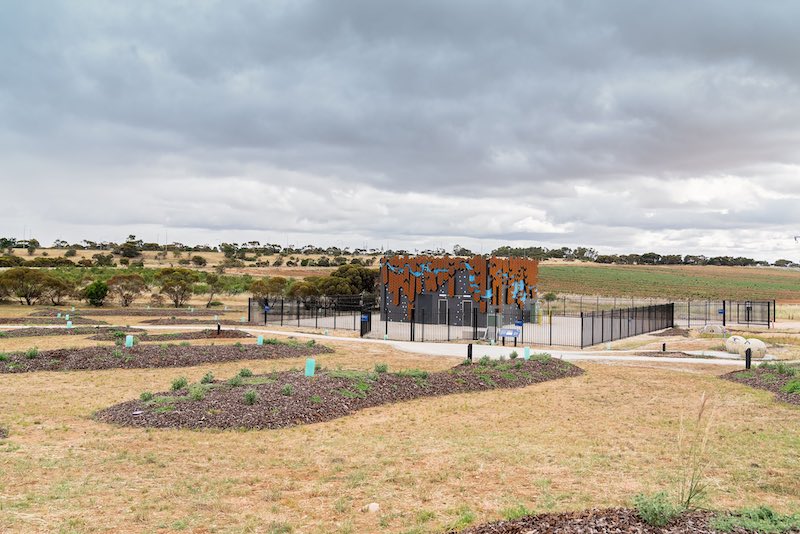 SA Water Senior Manager of Media, Community and Stakeholder Engagement Joshua Zugajev said sharing Traditional Owner culture with the wider community has been incorporated into almost every element on the site.

“The trail will eventually connect into the Rural City of Murray Bridge’s section of the Murray Coorong Trail. Surrounding the path is a rhythmic pattern of raised garden beds, set against a native grass sward, which is reminiscent of the ancient mallee-topped sand dunes still found in the local area.”

Zugajev said the landscape design was brought to life by Aboriginal architect and visual artist Paul Herzich, along with many environmental groups that collaborated with SA Water during the 18 month project.

“Installed at the head of the trail are two large mosaic-covered sculptures of ‘Kungari nga:tadi’ — black swan eggs — which were crafted by Adelaide artist Andrew Stock, with contribution from students at Unity College in Murray Bridge,” he said.

“The path also leads to two water basins, which are filled with rainwater runoff from the pump station roof.”

The site has been regenerated with more than 40 species of locally sourced native plants, including 10 threatened species, which are scattered across the two-hectare pump station site and irrigated via the treatment plant.

“[The plants] were chosen to survive the region’s hot summers and the local sandy conditions. Signage near each variety of plant shows what they will look like once fully grown,” Zugajev said.

“The plants are watered by recycled water straight from the Brinkley wastewater treatment plant, through a network of 9000 metres of underground drip-tube irrigation.

“Being near the entrance to Murray Bridge, it was important to create a space that is visually appealing and can still be enjoyed by the community, and it was fantastic to be able to partner with the local council and all our project partners to achieve this.” 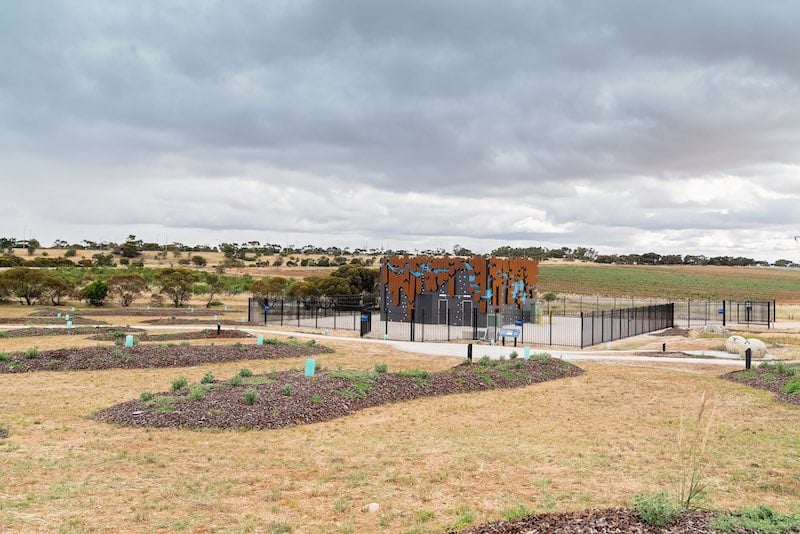 The Nankeri tapatawangk pump station was one of three built as part of a $52 million upgrade of the local wastewater network.

The upgrade included the construction of a new wastewater treatment plant in Brinkley — around 10 kilometres south of the Murray Bridge township — and an additional 18 kilometres of underground pipe.

Zugajev said SA Water aimed to incorporate sustainability and innovation into the design of the new wastewater treatment plant, as with the Jervois Road wastewater pump station.

“The Murray Bridge facility is one of four wastewater treatment plants around the state which recycles 100% of treated wastewater for reuse, with the high quality product used at a Department of Defence training area and a nearby pastoral property,” he said.

“Around 420 ground-mounted solar panels contribute to powering the plant, and it incorporates an odour control unit designed to remove 99.95% of odour as well as an advanced biological treatment process to help break down sewage into sludge in a more compact and efficient way.

“These features recently led to the overall upgrade receiving the highest design rating to date for a water or wastewater project assessed by the Infrastructure Sustainability Council of Australia.”

The plant began operating in June 2020, with the capacity to process up to 4.5 million litres of sewage a day for more than 14,000 local residents and businesses.

Cecilia Harris
Results from an inquiry into water sharing arrangements in the southern Basin are now in, with the Murray-Darling Basin Interim… Read Full Paper

Better enforcements are required around the Murray-Darling Basin

Water Source
Following a review into compliance matters across the Murray-Darling Basin, Queensland and New South Wales have been called on to… Read Full Paper
Advertising