Current issues in water demand models being used in Australia: A survey

By R Sarker and S Gato-Trinidad.

Water demand modelling is traditionally based on population growth and standards based on historical records of water consumption. Climate change, drought, increasing growth in population, agriculture and economy resulted in competing uses of an already scarce water resource and to implementation of water conservation programs and water restrictions.

The results of the survey revealed that a number of respondents found their models to be adequate as these are being used only for financial and water accounting needs and could not see the impact of factors mentioned in the modelling process.

The other respondents recognised the effect of these changes and have already incorporated in their water demand models one or two of: end-use analysis, climatic variables, water conservation programs, alternative sources of water and water restrictions. However, none of the respondents reported that all of these factors were considered in their current water demand models.

The recommendations of some respondents in the survey included: (i) integrating demand model with a supply model, (ii) incorporating climate variability and impact of rainwater use, (iii) linking network data and demand models, (iv) using population growth within acceptable confidence limits and (v) simplification and better user interface to make the models user-friendly.

Traditional water demand models calculate demand based mainly on population in a specific region. Climate change, drought, growth in population, economy and agriculture, along with environmental and social changes trigger changes in water use. As a consequence, alternative sources of water supply are identified to cope with the change.

To address these questions, an anonymous survey of urban and regional water authorities, agencies and consulting firms in Australia was conducted using a survey tool ‘Opinio’. The survey outcomes can benefit water resource planners and policy makers and other stakeholders involved in water modelling.

As water plays a crucial role in the location, function, and growth of communities (Marshall 1879), fresh water has become the source of increasing controversy, as supplies fail to meet demand in many areas (Arbués et al. 2003).

The effective supply of water is essential in geographical regions where the demand is increasing due to the growing population, and an improved living standard (Jacobs and Haarhoff 2002; Worthington and Hoffman 2008) along with economic growth and social and environmental changes.

Australia is moving towards more sustainable water management with rapid advances in the use of recycled water, greywater, rainwater and stormwater as alternatives to the use of traditional water supply augmentation approaches. Demand management is another technique to optimise the uses of limited water.

Modelling becomes an important part of demand management in the current climate of water restrictions and water conservation, e.g. in Melbourne, Australia. Many factors are involved in demand behaviour and can influence the water demand directly or indirectly (Herrera et al. 2010).

The anonymous survey targeted managers of a total of 100 organisations both urban and regional water authorities, agencies and consulting firms in Australia, involved in water supply planning, demand modelling and management.

The survey questions relate to the demand models currently being used, issues with these models, and appropriateness of the models; considering the effect of climate change, water restrictions, and water conservation practices. In this survey ‘climate change’ refers to consideration of climatic variables (rainfall, temperature and evapotranspiration).

A survey tool (Opinio) was used for the design of the questionnaire and for the implementation of the project.

A total of 100 representatives (managers) of both urban and rural water authorities, agencies and consulting firms in Australia, involved in water supply planning, demand modelling and management, were invited to respond to this anonymous survey through emails from December 1, 2014 to July 3, 2015. The email addresses of relevant representatives (managers) were collected from the corresponding websites of the organisations and from the Australian Water Directory published by Australian Water Association (AWA 2013).

The questionnaire was composed of five questions (Appendix A) and took approximately fifteen minutes to complete. Participants responded voluntarily and were free to withdraw.

Responses of the survey were downloaded from Opinio and then analysed. All data is kept confidential according to Swinburne University’s Human Research Ethics Committee (SUHREC).

A total of 16 responses out of 100 invitations were received from the anonymous survey and owing to the anonymity, the breakdown of respondents is not known.

The models in use were:

The other six respondents use other types of model such as: (i) Projection of historic demands, (ii) State water supply-demand model, (iii) Bespoke demand forecast model (partnership with bulk water supplier), (iv) Statistical analysis in-house, (v) Spreadsheets, and (vi) Customised. The suitability and constraints of the models currently being used by the respondents have been collated in Table 1, taking into account climate change (climatic variables: rainfall, temperature and evapotranspiration), water conservation, rainwater tank supplies and end use of water. Table 1 also includes descriptions of the models and some recommendations received from the respondents.

The following conclusions and recommendations can be drawn from the analysis of the anonymous survey results:

The authors would like to acknowledge the contribution of all respondents to this survey. The authors are also thankful to Swinburne’s Human Research Ethics Committee (SUHREC) for the ethic clearance of the survey project (SUHREC Project 2013/256).

Ram Chandra Sarker | Ram is a PhD Candidate in the Faculty of Science, Engineering and Technology, Swinburne University of Technology. He received a Master degree in Water Resources Engineering from the University of Tokyo. His research area relates to water demand modelling and management. He worked in civil engineering consulting and construction projects for three years in Bangladesh.

Dr Shirley Gato-Trinidad | Shirley is a Senior Lecturer and a Major Discipline Coordinator for the Civil Engineering Undergraduate Course at Swinburne University of Technology. Her research interests are in water resource engineering and management and urban water demand modelling. Prior to joining Swinburne University of Technology, Shirley was employed in different government and engineering consulting organisations in Australia, Thailand and Philippines for more than ten years.

Jacobs, H., and Haarhoff, J. 2002. End-use modelling as a means to predict the effects of water demand management. Paper presented at the Biennial Conference of the Water Institute of Southern Africa (WISA), South Africa.

Kowalski, M., and Marshalsay, D. 2005. Using measured micro component data to model the impact of water conservation strategies on the diurnal consumption profile. In: 3rd International Conference on the Efficient Use and Management of Water, ed., Santiago, Chile.

Troy, P., and Holloway, D. 2004. The use of residential water consumption as an urban planning tool: a pilot study in Adelaide. Journal of Environmental Planning and Management, 47(1), 97–114.

Rhiannon Hildebrand-Wise and Sam Skinner
"Getting the most out of life isn’t about how much you keep for yourself, but how much you pour into others” David A. Stoddard in… Read Full Paper 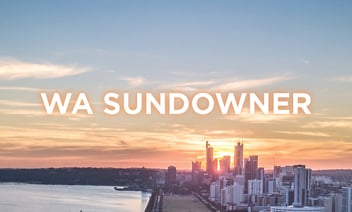 Would your Organisation like to host a Perth Sundowner in 2023?

Water Source
Would you like to promote your business to water professionals? We’re looking for Perth based sundowner hosts for 2023. Are you… Read Full Paper
Advertising