YWP of the Year Matt Robertson on travelling to China

He might still be a young water professional (YWP), but TasWater engineer Matthew Robertson has racked up experiences to rival peers decades his senior.

As the Australian Water Association (AWA) 2019 YWP of the Year, Robertson recently returned from a week-long work experience trip to China, where he visited water and wastewater treatment plants in between seeing the sites.

Sponsored by TRILITY, the trip is an opportunity for the YWP of the Year to get an insight into the Chinese water sector and bring back knowledge they can apply to their own role.

Robertson said the main thing he took from the trip was the pride the Chinese water professionals he met took in their plants.

“In Australia, if we build a new plant we’re always trying to minimise everything, we want to take up less space so there’s less to maintain,” he said.

“It was immediately obvious that the Chinese don’t do it that way.”

A garden at one of BEWG's treatment plants

While Australian water and wastewater treatment plants tend to be made up of tanks, pumps and pipes, Robertson said the Beijing Enterprises Water Group (BEWG) plants he saw were almost like small towns.

“A few of them had street signs, most of them had basketball courts, some had restaurants and accommodation … There were also gardens, places to exercise, places to eat and to relax – that was the standout thing for me,” he said.

“It was explained to us that BEWG recognised its workers spend a considerable portion of their life at these plants, so it’s important to nourish that and provide them with facilities for a healthy and happy work environment.”

One plant in Qinhuangdao, about 300 km east of Beijing, even had a vegetable garden on top of its chlorine contact tank.

“There were lots of farmers harvesting the crops while we were there,” he said.

“It is a great use of space [and] the produce is sold at the local market.”

Robertson got his first taste of the water sector through a scholarship while he was at university, before joining TasWater full-time in 2016.

Since then, he has been instrumental in helping the utility improve its operations. This includes working with colleague Stephen Westgate to develop a new method for measuring and monitoring water quality risk in water treatment systems.

The pair implemented the tool across Tasmania and were then able to use their findings to fast-track some critical infrastructure projects.

Robertson will discuss this work at the AWA’s YWP Conference held in Brisbane from 12-13 March.

While his state doesn’t have an official YWP network, Robertson said he would encourage his fellow Tasmanians to get involved in the movement and attend the event.

“[As a YWP] I was fortunate enough to end up travelling to China and also Cambodia,” he said.

“We’re often just doing our own thing down here in Tasmania but I would like to encourage Tasmanians – and regional YWPs from across the country – to get along to the conference.” 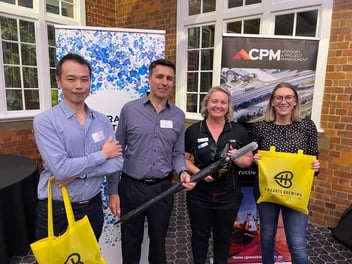 Celebrating the end of year and turning water to beer