The Australian Water Association (AWA) was saddened to share the news that John Parker, AWA Life Member and son of one of the Association’s founding fathers, Guy Parker, passed away on 5 August.

“Many of our members would be very familiar with John through his presentations for many years of the Guy Parker Award at Ozwater,” said AWA President Carmel Krogh OAM.

“Although John was very strongly associated with his father, he set his own mark on AWA. He was passionate about the Association and was proud to carry on his family legacy.

“John was an AWA member since 1973 and was made a life member for his contribution to the Association in 2003.

“On behalf of the Association I would like to pay our deepest condolences to all of John’s family. He was a true gentleman and leaves an indelible contribution to the Association.”

We contacted a few past presidents and honorary life members to pay tribute to a man who was a huge supporter of the Association. This is what they had to say.

I am so saddened by the passing of John Parker, a wonderful person in the Australian water industry and, more importantly, a valued long-time friend. John had a challenge throughout his life – being the son of Guy Parker, a doyen in the 1950s to 1970s.

They say it is often hard to live up to a father with a reputation. In John’s case he did this with distinction, making an indelible mark on the water sector. He did this by his high integrity consulting practice and by his voluntary contributions to water industry associations, particularly the AWA.

We sat together on several committees and John’s contribution and advice were always sage. Whenever there was debate, often with feeling, John provided wise and calm counsel.

Such a wonderful person, who will not be forgotten and will always be appreciated.

John was highly respected by our Committee Members who always valued his expertise and balanced consideration of issues that were discussed.

During my time he was involved on the Sub-Committee which moved our Branch Secretariat from an honorary one to a professional appointment to better serve our membership base. It was gratefully appreciated that his office was always readily made available for AWA sub-committee and other special meetings.

His valued service to AWA was recognised with the presentation of Honorary Life Membership, an honour attained by his father before him.

John Parker was a great contributor to the Association at the Branch and Federal levels. It was always a pleasure to be with John. He was a thoughtful and courteous gentleman.

John will be much missed, not least among the 'life members' kindly included in the Victorian Branch Annual Dinners.

John was clearly one of nature’s true gentleman – very well respected within the water industry as a whole and AWA where he continued the proud history of his father who was one of the Association’s founders.

John served the Association in a wide variety of roles over many years and made significant contributions in many key areas. He was always true to the ideals and objectives of the Association while encouraging the next generation of water professionals to become leaders in AWA.

Personally, I was grateful for the encouragement and assistance John gave me during my involvement at both State and National levels of AWA. He always had time to chat and offer sound advice — forever the professional.

John leaves a large legacy across the water industry and will be sadly missed by the numerous people he has helped over his career.

If you would like to pay your respects to John's family, we welcome you to leave a tribute in the public guestbook. 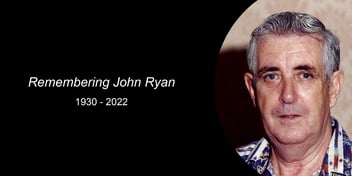 In Memory of John Ryan 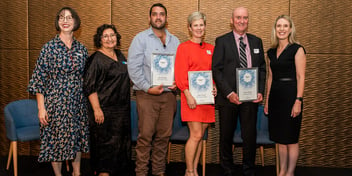 Water Source
Over 100 people attended the NSW Legends of Water dinner on Wednesday 1 December, as the community turned out at L’Aqua by Dockside… Read Full Paper
Advertising