Resources > Latest News > Queensland professionals get up close to water

Queensland professionals get up close to water

In 2019, the AWA’s Queensland branch focused on community water literacy as an underlying theme across all its events. So, what better way to wrap up the past 12 months than with an event at a water-themed gallery exhibition?

For the first time in a long time, the QLD branch put networking front and centre at the event. The turn-out showed we should do it more often. Despite the horrendous traffic and pouring rain, 145 people turned up for the networking breakfast at the Gallery of Modern Art in Brisbane on 12 February.

After a brief welcome from QLD Branch President Justin Simonis, who announced our focus in 2020 will be rural and regional water, AECOM’s Mark Taylor took the floor to give the sponsor’s welcome.

Once the formalities were over, it was time for uninterrupted networking! Along with a private viewing of the WATER exhibition, of course.

Even after the official end time of 10am there were still many people left continuing the conversation.

The exhibition was a great catalyst for encouraging networking among attendees. Each person viewing the artworks had their own ideas about what water is, and whether they thought the exhibition had done it justice.

The Queensland networking breakfast was sponsored by AECOM. 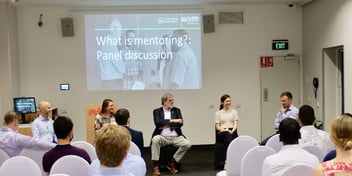 Industry to embark on "water journey" for Ozwater'22

Cecilia Harris
Ozwater’22 is set to hit Brisbane from 10–12 May 2022, and the event’s theme — Our Water Journey — calls on the sector to unite and… Read Full Paper

What you missed at the February-April water events in Queensland