High-quality recycled water from the Wollongong Water Recycling Plant is being used by Port Kembla's Coregas in a trial to create hydrogen.

Sydney Water is working with Coregas in the trial under the Port Kembla Hydrogen Hub to produce grey hydrogen via steam gas reforming as a way to power heavy vehicles, including trucks and buses.

The utility produces 37.6 megalitres a day of highly treated wastewater at its Wollongong Water Recycling Plant, which represents a significant capacity to produce hydrogen at scale.

Sydney Water Head of Innovation and Product Development Daniel Cooper said the trial is another step in the utility’s efforts towards contributing to sustainable energy production and Australia’s clean energy future.

“Sydney Water has the opportunity to be one of the largest providers of recycled water for hydrogen production in Australia — recycled water is a cheap, clean and drought resistant source of water that doesn't impact on drinking water supplies,” he said.

“As we move towards a lower-emission and more sustainable future, hydrogen is gaining momentum as a ground-breaking energy storage solution.

“Hydrogen has the potential to decarbonise many Australian industries and to support economic growth as a new export market. This is a giant stepping stone into the future of Sydney Water as we actively consider contributing to the emerging hydrogen economy.

“Ultimately, we would hope to provide recycled water for a larger scale hydrogen production hub, not just to meet hydrogen needs here in Australia but possibly also for international export.”

Charting the path to a greener future

The trial follows Sydney Water’s Hydrogen Roadmap, which has been developed in collaboration with the University of New South Wales to assess ways the utility can contribute to the emerging green hydrogen economy by using high-quality treated wastewater.

“Compared to diesel trucks, hydrogen produced by steam reforming non-renewable methane delivers an immediate 50 per cent reduction in emissions, and when biomethane is used as the feedstock it can eliminate 100 per cent of emissions.

“We also know that sustainability means managing Australia’s precious water resources and we are therefore delighted to partner with Sydney Water to use high quality recycled water in our hydrogen production process.”

Is recycled water the key to growing a sustainable hydrogen economy? 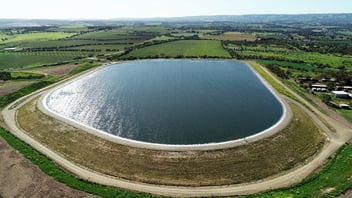 From Water to Wine

Water Source
Water, wine, and sustainability are three things South Australians love!  You may recall in the last edition of Source SA we… Read Full Paper