Funding for sustainability initiatives can be hard to come by if you’re a local council. In the face of a fast changing world, Martin Kovacs takes stock of how councils can work through the financial barrier.

Councils that proactively pursue water management and sustainability initiatives are capable of incredible things. Local initiatives facilitate grassroots involvement and draw on local knowledge to deliver communities uniquely tailored projects. However, for smaller councils in particular, the path to full-scale project development can be prohibitively complex, and securing the necessary funding may represent a significant barrier.

Limited resources loom as an ever-present challenge for many smaller councils, potentially hindering development of projects that may require extensive collaboration and coordination undertaken over the course of years. Compounding the scope of challenges faced, councils may simply lack the resources and know-how needed to apply for government funding.

Given the long-term outlook required for water management and sustainability projects, the concern is that prescriptive government funding frameworks serve to narrow the focus of councils, rather than encouraging forward-thinking innovation.

Arup Water Strategy and Planning Practice Leader Elaine Pang said these types of funding arrangements “mean that a lot of small councils that just have to do business as usual with very little money are not really getting a look-in”.

“Only the councils that scramble and have the resources manage to even apply,” Pang said. “Even then, some of them might not put together a good business case, because they aren’t necessarily experienced at crafting a winning submission – so the money doesn’t necessarily go to where it is most needed.”

Burdekin Shire Council Water and Waste Water Manager Shaun Johnston noted that most projects fall down at the planning stage, with councils pressed for resources not having “time to plan ahead and formulate good funding applications”.

“It is the ad-hoc nature of rounds and rigid timeframes for delivery of the politically driven funding processes of the states that are the biggest single barriers to the money getting to where it is most needed,” he said.

If councils do not play a proactive role in projects, valuable local information may not be utilised, with Johnston stating it can make “for an incomplete and disjointed effort, and a lot of people working at opposite causes”.

Johnston also highlighted the challenges councils face in promoting what is required locally, with bigger players potentially uninformed about the aims of local government.

“Once again, it’s a resource matter,” he said.

“There’s a lot of small councils that just don’t have the resources to ever get on stage and be seen who’ve got a lot of good ideas and have taken a lot of good initiatives.”

“Planning and development can impact how water is managed, just by the nature of what kind of activities you allow in a certain area, and that happens in a local government, but would not happen in a larger utility,” he said.

“Beyond that, local governments are affected by how water is managed in much the same way their communities are affected. Not only do they live in the community, they are chosen and resourced by the community – so they keenly feel the impacts and have a vested interest in getting it right.”

Hieatt stressed the importance of councils adopting a flexible approach to project development, acknowledging that, amid a traditional reliance on state and federal grants, a key problem with funding “is that we are myopic in where it comes from”.

“We need to look towards other sources of funding: vested stakeholders that can contribute to water management activities,” he said.

“When managing water in a local community, there’s a lot of people affected, and local businesses, commercial industry and agriculture would invest if brought into projects.”

Frontier Economics’ Anna Wilson pointed to a number of partnership options councils may consider in pursuing projects, including engaging with water utilities, entities with wider catchment or waterway management responsibilities or private partners.

While stressing that comprehensive industry engagement helps pinpoint and prioritise high-value projects, Wilson also highlighted the importance of defining roles and responsibilities from the outset.

As a starting point, Wilson recommends councils undertake a “bottom-up assessment of where they consider action on water management is required”.

“Councils need to start by determining who might benefit or be impacted by a project and if so by how much,” she said.

“A second question then relates to the ability of these parties to capture any benefits – for example, will it reduce their future costs, or can they generate additional revenue as a result of the project?”

With funding potentially coming from multiple sources, Wilson said project partners will “have different objectives, ways their funding can be provided and different processes for reaching a decision within their own organisation”.

“One of the biggest problems can be having no understanding of that upfront,” she said. “It does come down to that two-step process: do you know what you care about, and then is there some way in which you are communicating that with others?”

Ongoing engagement has been a feature of Rockhampton Regional Council’s (RRC) promotion of terrestrial aquaculture opportunities in the region, encompassing both public and private sector collaboration.

Clark said the council has embarked upon a range of initiatives that have been informed by State Government policy.

“The council has been quite proactive in terms of trying to gain a maximum amount of economic opportunities. We’ve definitely been working with the Government on their aspirations, but then also considering how do we as a region position ourselves in the best possible way to take advantage
of policy direction.”

Clark said this approach has seen the council look “further afield”, with it having secured a federal grant for a delegation to visit Singapore towards the end of last year to promote opportunities in the region. Clark also pointed to development of the Aquaculture Industry Development Plan to promote further industry engagement.

“The best way I believe we can effectively assist development of businesses to launch within the Rockhampton region is to develop the plan,” Clark said.

More flexible government funding frameworks could assist development of smaller projects, with Pang stating that “from the long-term perspective it’s important to not be hostage to the political cycle”.

Pang pointed to changes to the NSW Government’s Safe and Secure Water Program criteria, with the program relaunched in October last year, as an example of government action to promote greater funding flexibility.

The NSW government has advised that under the changes funding is no longer contingent on cost-benefit ratios, allowing for project funding “based on need and known issues, rather than on economic viability”.

“Changing to this prioritisation method is definitely a major step in the right direction. We need to think more long term: what are the long-term benefits of what we’re doing, what is the best way to spend our money and what is the path of least regret?”

Johnston said there is a good argument for the State and Federal Governments “to have a funding pool with no dedicated funding round attached to it”, set aside for local bodies “who can come up with projects most needed”.

Johnston also pointed to the potential for “itinerant officers to assist small councils in application preparation”, helping with funding-related issues.

“It’d probably need two or three people per state to make that work and give the smaller councils a more level playing field. It makes the world of difference having that resource.” 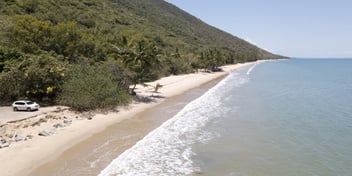 “Wat-er” We Doing? A View from Cairns from Regional Water Champion, Samantha Guy

Samantha Guy & Janice Wilson
Samantha Guy is a Water Engineer at Arup based out of the Cairns office. She started her career with Unitywater and has experience… Read Full Paper
Advertising