UK must act now or face water shortages in 25 years

The UK could face a serious water shortage by 2050 if the country doesn’t act now to reduce demand and increase supply.

This was the message delivered by Chief Executive of the Environment Agency Sir James Bevan during an address at the Waterwise conference held in London last month.

Bevan said the county is facing the “jaws of death” where, unless action is taken, the “existential threat” of climate change and population growth will mean the UK won’t have enough water to meet demand.

Climate change is expected to cause hotter and drier summers, he said, which will mean more water shortages.

“Result: on the present projections, many parts of our country will face significant water deficits by 2050, particularly in the south east where much of the UK population lives.”

And this population is expected to increase from the current 67 million to 75 million by 2050.

“All those extra people need houses and roads and energy and food and places to work, all of which will require more water,” Bevan said.

“In the face of water scarcity, we must tackle both sides of the equation: reduce demand and increase supply.”

In order to ensure water security, a coalition of government, regulators, water companies, the National Infrastructure Commission and NGOs need to work together.

The public will also need to play a role to help the country avoid the jaws of death.

“The fact is that we won’t have long-term water security unless all of us change our behaviour,” Bevan said.

“We all need to use less water and use it more efficiently.”

He said behaviour change around smoking (everyone did it) and seatbelts (nobody wore them) shows that change is possible.

“We need water wastage to be as socially unacceptable as blowing smoke in the face of a baby or throwing your plastic bags into the sea,” he said.

With the average person in the UK currently using 140L of water per day, Bevan said a target of 100L or less over the next few decades would reduce water stress.

“If by 2050 we reduced per capita consumption to 100L a day, leakage by 50%, and did nothing else, it would provide enough water for an additional 20 million people without taking any more from the environment,” he said.

“While our goal – long-term water resilience for this country – may be ambitious, it is also achievable.”

Elle Hardy
Water management has a bigger role to play in helping countries mitigate and adapt to climate change, according to a new report… Read Full Paper

Building resilience in our regions

Elle Hardy
At a time of increased climate variability, and as the current drought wreaks havoc across parts of the country, managing the… Read Full Paper 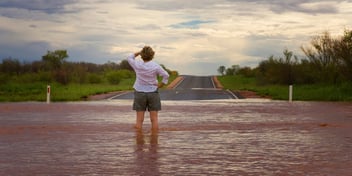