Experts have said wastewater treatment plants (WWTP) must ramp up their monitoring of microplastics, warning the issue is much broader than microbeads from personal care products ending up in treated effluent.

Although concerns about the impact of microplastics on marine species have been highly publicised, a recent International Water Association journal report explores the implications of microplastics for water utilities and their wastewater treatment processes.

“Toxicity and physiochemical changes [to microplastics] might happen as a result of wastewater treatment processes,” said report co-author Shima Ziajahromi.

“Treatment can cause a layer of biofilm on the wastewater-based microplastic, which might change the physiochemical properties of microplastics – their density, hydrophobicity and buoyancy. That could in turn affect the toxicity of the plastic debris in the aquatic environment.”

Implications for biosolids management are another often-overlooked issue in the discussion on microplastics, said Ziajahromi.

“Obviously, to capture microplastics we retain them in the treated sludge. This sludge is then used as soil amendment, which creates the potential to introduce microplastics into the soil,” she said.

“We can then also reintroduce microplastics back to the aquatic environment through runoff from that soil.

It's hoped that by 2018 one source of microplastics – microbeads in personal care products – will be eliminated via a government-led voluntary phase-out.

However, that will not spell an end to microplastics concerns for water utilities, Ziajahromi said.

“The main concern is not microbeads – it's been shown in many studies that fibre is the dominant type of detected microplastic,” she said.

“That can be associated with washing synthetic clothes and other textiles – it's reported that more than 100 fibres per litre of laundry waste can be released to WWTPs.”

Ziajahromi and her co-authors were calling on the water industry to ramp up monitoring of microplastics in order to fill gaps in knowledge.

“We still don't know how many microplastics are derived from packaging and other plastic things, and how many are coming from WWTPs,” she said.

Water Source
Researchers from the University of Bath have developed a new technology for removing micropollutants from wastewater, promising a… Read Full Paper

Has the solution for filtering out microplastics been hiding in plain sight? 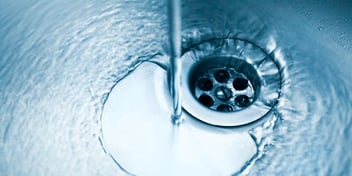