Why the water industry needs a planetary lens

Professor Tony Capon, Director of Monash University’s Sustainable Development Institute, had the weight of decades of research behind him as he pushed for a more holistic view of planetary health and water’s role underpinning it.

The public health physician began by contextualising our current era of the 21st century against a broader geological backdrop.

“We’re leaving the Goldilocks epoch for human life on earth – one not too hot and not too cold,” he said. “We’re entering a new epoch where, collectively, we’re changing natural systems to such an extent that it will be recorded in the fossil record in millennia to come.”

This new era — the anthropocene epoch — is one dominated by humanity and its impact on the planet’s health.

Capon stressed how much is known of the need to transition to more sustainable models of development, and how much a concerted effort to implement those models is still lacking.

To illustrate the burgeoning awareness of humanity’s impact on the earth, Capon drew a figurative line from Hippocrates in Ancient Greece, through the World Commission on Environment and Development in the 1980s, to the contemporary work done by the Monash University-led Revitalising Informal Settlements and their Environments (RISE) research program.

“All human activities have implications for our health, either positively or negatively,” he said. “But in public health, we don't always remember that human activities affect the health of the earth.”

The same goes for water: “Our water cultures, policies and practices have implications for the health of people and the health of the planet.”

The health gains of the past 70 years – think the uptick in global life expectancy due to improved public health policies and programs – have been countered by an increased exploitation of the planet’s natural resources, plus rapid population growth on a global scale and the concentration of people in urban environments.

“It was about 10 years ago when we passed the point where more people live in cities than in rural areas,” said Capon. “For the foreseeable future, most population growth will be in cities.

“The urban context of water is enormously important.”

He celebrated efforts to move to water-sensitive approaches to development, and issued a call to arms that had been echoed by numerous speakers throughout the conference.

“We need an eco-social approach in all the work we do, recognising the ecological, economic and social determinants of health,” said Capon.

“We all need to be thinking in systems, acknowledging the interdependence of all species – and understand that when we intervene, there are potentially unintended consequences and feedback.

The session’s key take out?

Cecilia Harris
Bendigo Creek has benefited from a new project aimed at improving its water health, as well as the health of its tributaries. Read Full Paper 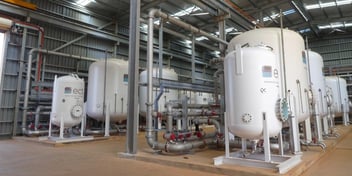 Eurofins contributing to clean drinking water in the Katherine