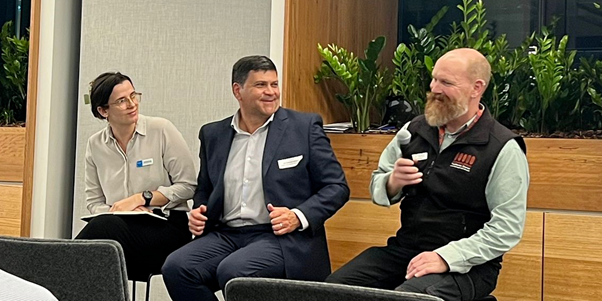 In light of DELWP’s recent release of the Water Is Life: Traditional Owner Access to Water Roadmap, Victoria’s YWP Committee held the Aboriginal Voices in Water Professional Development event on the 25th of October.

Wurundjeri Woi-Worrung Elder, Uncle Bill Nicholson Jr, opened the event with a Welcome to Country. Bill spoke to the Wurundjeri People’s Worldview in which water represents the spirit of Country. Bill prompted attendees to consider how they can consider and care for Country in their day-to-day decision-making across the water sector with this Worldview in mind moving forward.

Dr Erin O’Donnell, a Research Fellow at the University of Melbourne’s Law School, provided an overview of cultural water and pathways to water justice in a Victorian context. Erin highlighted that Aqua Nullius, the assumption that water belonged to no one before colonisation, persists as a present rather than a historical issue. Erin also challenged attendees to start associating our waterways as living entities. By this, Erin emphasised the value of questioning what we want for our waterways as living entities to guide our decision-making instead of merely considering what we can make water resources do for us.

The value of viewing waterways as Living Entities was then corroborated by Kirsty Savage, the Senior Manager of DELWP’s Aboriginal Water Program, as she unpacked the Water Is Life: Traditional Owner Access to Water Roadmap. Namely, a key targeted outcome of the roadmap is to recognise Rivers as Living Entities and Traditional Owners as their voices.

Craig Parker then discussed his insights from becoming an Executive Office at the Gunaikurnai Traditional Owners Land Management Board. In particular, Craig addressed the need for individuals to champion change and harness bureaucratic bravery to catalyse the organisational changes needed to return water authority to Traditional Owners.

Finally, Dr Rohan, a Non-Executive Director at South East Water Corporation, advised attendees on the importance of ensuring Traditional Owner engagement with organisations is facilitated ethically and in a culturally appropriate way. Such insights included the importance of deep listening, early engagement, and refraining from homogenising First Nations cultures, histories and connection to Country.

Each speaker’s insights attracted an abundance of questions and discussions from the audience. In answering these questions, the speakers came to a clear consensus that the efficacy of the Water is Life Roadmap relies upon allies consciously decolonising their solidarity through listening and ensuring their intentions of engagement are not transactional.

Water Source
The winners of the Australian Water Association's Victorian Water Awards have been announced at the Awards Lunch on Thursday, 4… Read Full Paper