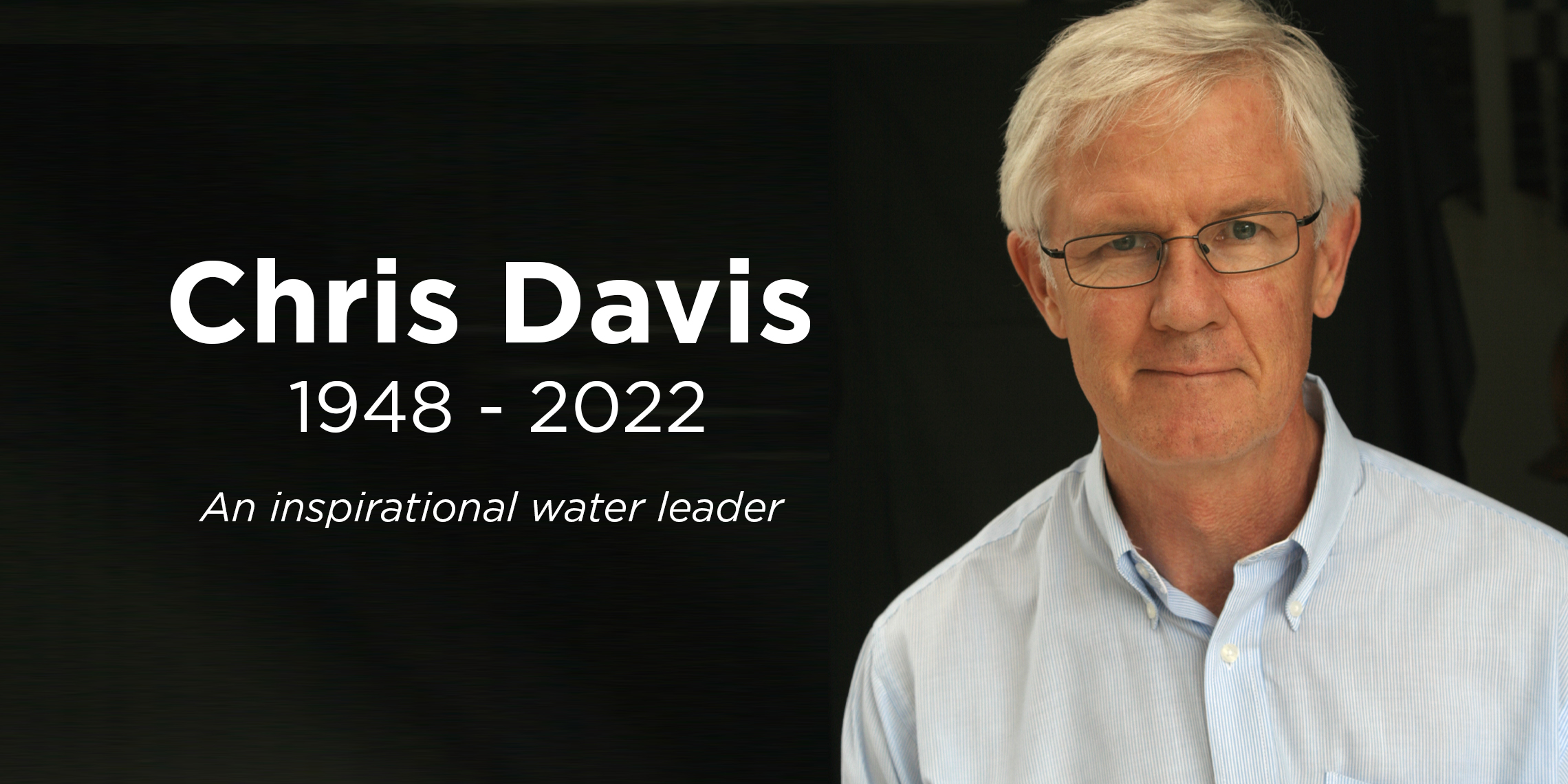 Chris is remembered not just for his long 14-year tenure as Chief Executive of the AWA, but also as one of the more well-known and liked members of the water sector. Chris was noted for his hard work not just in the Australian water sector, but also for his contribution to the international water sector and his pioneering role modelling for women and young professionals in the workplace.

More recently, Chris is remembered for his tireless advocacy and raising awareness of Parkinson’s disease, including a period serving as the President of Parkinson’s NSW.

‘Chris is one of the most beautiful people I have met and feel proud to call him a friend. We worked as a CEO and Chair combo in the mid-nineties, and I learnt so much from him about the water world, networking  and about leadership. From “meeting” in our kitchen in early mornings after he had caught the train overnight to Brisbane to spending time holidaying in Italy, I will always cherish the relationship and celebrate what he achieved for the Australian water sector and the Australian community more broadly.’
Mark Pascoe, AWA Past President, Chief Executive Officer - International WaterCentre 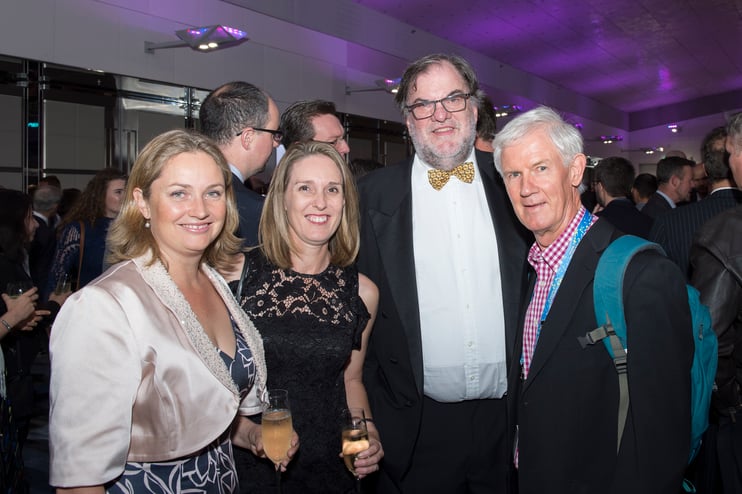 Chris grew up in South Africa, and completed his university studies there and the United States. Even before leaving South Africa, Chris was receiving international recognition. He was awarded the Hatfield Award for Professionalism from the Water Environment Federation, an international award based in the United States that recognised wastewater treatment plant operators for their outstanding performance.

Working for GHD in South Africa, one of the leading countries at the time in the technology of removing nutrients from wastewater, Chris’ skillset was highly sought after in Australia. Chris emigrated to Sydney with GHD’s support to work at a treatment plant to help Australia adopt the new technology. He then joined Aquatec Maxcon, expanding his experience in water and wastewater technology and equipment.

‘Chris was an inspirational leader in water, not only as the voice and face of AWA for 15 years, but leading the water debate on sustainability, community education, diversity and water reform. He challenged water professionals to make a difference. A leader of passion, commitment and intellect. A trusted mentor, and dear friend to many. Chris leaves behind a better water community and a legacy through the people he inspired’
Darryl Day, AWA Past President, Chief Executive - Peter Cullen Trust 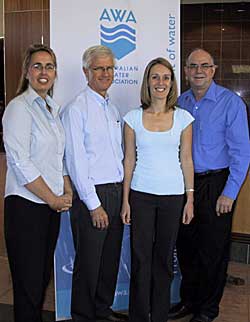 Chris’ leadership period at AWA coincided with the Millennium drought, the worst on record. Community interest in water issues were unprecedented, with the general public wanting more information, transparency and input in water management decision making. The drought highlighted some of the country’s more inefficient and outdated water management practices, and placed extreme pressure on urban water supplies and agricultural production.

Chris used his position at the head of AWA to take a leadership role in this period of great transformation. He championed a sustainable approach, and set out an independent path as a spokesperson and advisor, meeting and consulting with politicians and policy makers, as well as with corporate members in need of a balanced industry voice. This included serving as Chair of the Independent Water Advisory Panel from 2006 to 2017, overseeing the development of both the Sydney Metro Water Plan and Lower Hunter Water Plan, two of the best practice plans for urban water management in Australia and internationally.

“I worked closely with Chris in my first job in the water sector and often reflect on how lucky I am to have met such a great influence so early on in my career.  He was inspirational from day one; well respected, a willingness to drive change, an understanding of what to influence and an expert connector to make it happen. Chris was dedicated to advancing the sustainable management of water.  He was instrumental in a time of great change and his legacy will be recognised in the water sector for years to come.”
Clare Porter, Culture, Ethics and Insights Manager – Sydney Water 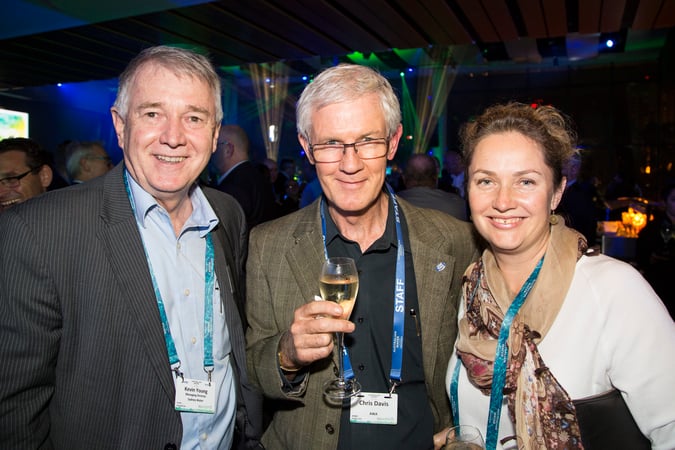 Chris also internally transformed AWA. He shifted the focus of AWA’s annual conference from a technically focused event into a larger event that touched on all areas of the industry, with an increased emphasis on management aspects, community engagement and sustainable practices. In the process, Ozwater became what we know it to be today: Australia’s premier water conference and exhibition, with thousands of Australian and international attendees. He also transformed the Water Journal, increasing its professionalism, reach, style and size, as well as establishing the weekly email water news service now known as Water Source.

In 2001, AWA converted itself to a Company Limited by Guarantee and in 2005 undertook the transition to a new constitution with governance changes. These included moving to a skills-based board of up to nine members and a Strategic Advisory Council. Chris documented much of the history of the Association in the “50 years of water in Australia: 1962 to 2012” publication, an extensively researched history of water during AWA’s first 50 years.

The Water Education Network was established in 2004, under the management of current AWA CEO Corinne Cheeseman, with Chris playing a key role in its founding. Believing in identifying and championing the opportunity for a strong network for the newly emerging role of water educators, the network grew to 1200 members within six months.

‘ I had the privilege of working with Chris at AWA from 2004 -2007. Chris was the first significant leader and mentor I had in my career and we stayed in contact over the years. Chris has a genuine way with people, he was passionate about important issues and his calm demeanour and ability to bring stakeholders together is always something I admired. When I think of the ‘water family’ – Chris is the first one who comes to mind.

I know that many of our members will be saddened by the loss of Chris. He contributed so much to water in Australia and overseas. When he heard of my appointment to the CEO role, Chris sent me a text message ‘…Great news and the door is open to let AWA influence key issues’. Indeed we will continue to carry forward his great legacy.’
Corinne Cheeseman, Chief Executive - Australian Water Association

The view to water internationally

Chris had an eye towards the global water community, building valuable links to many international bodies and representing Australian water around the world. He played a significant role in the formation of the International Water Association (IWA), the largest membership association in global water.

The 11th IWSA-ASPAC Regional Conference on Integrating the Urban Water Cycle in 1998 in Sydney and the 3rd IWA Word Water Congress in 2002 in Melbourne were two significant international conferences Chris played a significant organising role for. He also was a major figure in AWA participating in the Stockholm Junior Water Prize and Australia joining the Global Water Partnership.

Chris was on the founding committee of WaterAid Australia, serving on the Board as Treasurer. Chris helped create a series of successful fundraising campaigns to provide funding for WaterAid Australia’s first project, in Papua New Guinea. WaterAid Australia remains a key partner of the water sector and annually provides $17 million for communities in need of water and sanitation services.

‘I think Chris had a rare set of capacities (I won’t call them gifts, because he wouldn’t have – I reckon he would say anyone could learn to do these things) to strategise broadly and deftly so the directions he moved us in always made the world a better place; to integrate complex inputs without losing what really mattered; and above all, to listen deeply in the way Miriam-Rose Ungunmerr invites us to, so that I always felt seen, heard, and respected by Chris – I think everyone did in his presence – and that might be his greatest gift to us all. I reckon he is our sector’s greatest legend and I’ll miss him dearly.’
Cynthia Mitchell, Emeritus Professor - Institute of Sustainable Futures 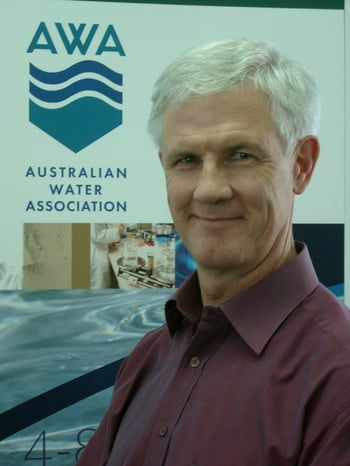 Chris was a great champion of inclusiveness and diversity, pushing to give women a platform and voice within the water community. He worked closely with a number of women leaders to create the first Women in Water National Special Interest Group in the 1990s, and actively supported women in leadership positions. Many women in water leadership positions thank him for his support and mentorship, including AWA’s first and second female Presidents Lucia Cade and Carmel Krogh OAM, and AWA’s first female CEO Corinne Cheeseman.

“Chris was so generous with his sponsorship and support of people. He invited me to present a young member’s perspective to the newly restructured AWA board in 2006 which gave me the opportunity to broaden my perspective to a national and international one. He encouraged me to nominate for the board and I am forever grateful that I listened to him as it led to a great 7 years and the very special opportunity of being the Association’s first female President, just in time for AWA’s 50th anniversary celebrations. This opened many doors for me and I met so many interesting and talented people. Thank you Chris, you have made such a difference to the careers of so many of us.”
Lucia Cade FAICD, Past President – AWA, Non Executive Director

‘I first met Chris when I was a young engineer starting out in the water industry. His knowledge, professionalism, enthusiasm and absolute commitment to the water industry, coupled with his kindness and humility made him the most inspirational of leaders. I am honoured to have known him and truly grateful for his wisdom and support over so many years. A true icon of both AWA and the water industry.’
Carmel Krogh OAM, Immediate Past President – AWA, Non Executive Director

This commitment to advocacy and social justice wasn’t confined to the water sector. Chris was diagnosed with Parkinson’s disease in 2004, and decided to take his leadership and advocacy experience into working with Parkinson’s NSW. Chris served as President of Parkinson’s NSW form 2010 to 2014, and played an active role in promoting and supporting Parkinson’s understanding and research.

Chris became involved in contributing to raising awareness through charity bike rides, once even riding 165 km in a single day to raise awareness. He helped create ‘ParkinSong’ while NSW President, working with singer, teacher and choir leader Nadia Cooper to establish a choir that would provide vocal exercises for those with the disease. University of Sydney research has confirmed that ParkinSong’s program is the first to have reasonable evidence that it seems to be having a positive impact on speech production for people with Parkinson’s.

In his farewell note as President of Parkinson’s NSW, Chris said “I subscribe to the position that, while I have Parkinson’s disease, it does not have me.” He is remembered fondly by a significant amount of people in water, professional associations, and people involved in Parkinson’s advocacy. Most of all, he is remembered with love by his partner Pam, their children and grandchildren.

AWA CEO Corinne Cheeseman on finding opportunities in a crisis

Ruth Cooper
Starting a new job in the midst of a global pandemic has its challenges, but for self-described optimist and new Australian Water… Read Full Paper