Last month, Melbourne played host to the biggest Ozwater conference on record. With more than 4700 attendees, 380 presenters and a gala dinner for 1100 people, the organising committee ensured Ozwater’19 was bigger and better than Brisbane just the year before.

The conference delivered a strong start. After a beautiful opening ceremony and speeches from the AWA CEO, President and chair of the organising committee, attendees heard from two inspiring keynote speakers.

Economist Jeffrey Sachs was up first, delivering his talk via hologram from the US. This was so realistic you’d have thought Sachs really was in the room, if it wasn’t for the fact he was floating 50cm above the stage.

The second speaker, Mina Guli, was just as impressive, having run an astonishing 62 consecutive marathons to raise awareness about the global water crisis. Her commitment led to a global community coming together, an outcome that went beyond her expectations.

The conference theme was ‘Transforming our World’, and who better to transform the world than the next generation of water professionals? Ozwater’19 put the spotlight on successful and inspiring young people, including MC Yasmin Poole, who is the former chair of the Victorian Government’s Youth Congress.

There were also keynote presentations from Macinley Butson, the 2017 Australian Stockholm Junior Water Prize winner, and Lucas Patchett and David Tubb from incredible NGO Orange Sky, who encouraged other young people to play their role in transforming our world.

The gala dinner was a highlight of the conference. Competition for the National Water Awards was tough; despite having some great projects and people on the finals list, SA didn’t pick up any awards this year. The exhibition was also a success, providing an opportunity to learn about new products and innovations, and network with peers over coffee or lunch.

With a range of high-quality presentations, the technical program was also outstanding. One particular topic stood out from the crowd: machine learning. Numerous talks highlighted the results of experiments that have been conducted, including using computers to process large amounts of data and turning it into useful information for water businesses. Machines could end up being our friends after all. 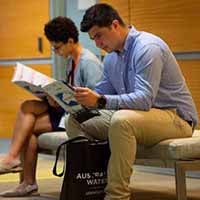 An Ozwater we will never forget