With sewer blockages on the rise following the COVID-19 toilet paper shortage, the timing couldn’t be better for the release of a new industry standard for flushability.

The new standard was developed with the use of a replica sewer main located at Urban Utilities’ Luggage Point Innovation Centre.

Speaking to delegates at Ozwater’20 Online, Urban Utilities Senior Technical Officer Chantal Keane said the recent blockage events were a reminder of how costly and disruptive flushing wet wipe products can be.

“Urban Utilities deals with 3500 blockages per year. We remove 120 tonnes of wet wipes from sewers at a cost of about $1 million per year. When wet wipes first came on the market, there was a noticeable increase in sewer blockages,” Keane said.

“In recent months, with toilet paper shortages due to coronavirus stockpiling, people were buying tissues and paper towels to use as toilet paper substitutes. So this research is really important, especially now.”

Keane said the research project launched due to a continued lack of appropriate standards for flushability, with the utility seeking a more comprehensive data set.

“There was a standard that came about in 2008 and it was developed primarily by the manufacturers,” Keane said.

“It was skewed in their favour. The standard that they developed disintegrated the wipes more so than an actual sewer would.

“A new standard was developed independently in 2017, but we found [this] was too strict.”

After a standards committee was established in 2019, testing began, including running wet wipes from a huge array of brands through the simulation sewer to see how they responded in a more realistic setting.

“We were lucky enough to have access to the replica test sewer located at Urban Utilities Luggage Point Innovation Centre. It’s 1.2 km in length and it’s the largest replica sewer in the world. We jumped at the chance to help achieve better standards by having access to what actually occurs in the sewer,” Keane said.

“We’ve tested every available product marketed as flushable on Australian shelves. We have also tested three brands from New Zealand and a brand from the United Kingdom, as well as some brands from Japan. It's a massive range of wipes that we’ve been testing.

“Many of these wipes are varying combinations of plastic and paper. Studies have shown the higher the ratio of plastic to paper, the less likely it is to disintegrate.”

Keane said that while the project took a lot longer than expected, it’s the first time an agreement on standards has been met across the board of stakeholders.

“Our results fell right in the middle of the gap between existing standards, depending on the material used,” Keane said.

“For the first time in history, we have an agreement on standards between the water industry and the flushable wipes industry, so we are all very excited.”

The new standard should lead to clearer labelling and give consumers confidence that they’re only flushing products that will break down once they’re in the sewer system.

To learn more about Ozwater’20 Online and to register, click here. 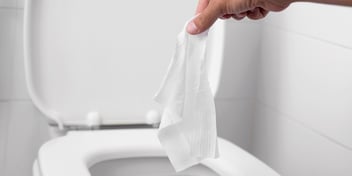 Cecilia Harris
The Australian water community has hailed the release of a world-first "flushable" labelling standard, with the much-needed… Read Full Paper

The real world pros and pitfalls of robo-calling

Water Source
With customer engagement becoming one of the most influential megatrends in the water sector, robo-calling – more commonly known as… Read Full Paper
Advertising