Australian researchers have invented a $20 device that can detect SARS-CoV-2 in wastewater and are exporting it to the world.

Civil engineers from Monash University, in partnership with a consortium of universities and industry locally and internationally, have provided the first evidence that passive samplers can be used to detect SARS-CoV-2 — the virus that causes COVID-19 — in wastewater.

Research with the device, dubbed the "Torpedo Passive Sampler" or the "sewage submarine", was conducted at three different scales — an individual lot, a suburb and a city.

The passive samplers were placed across eight study sites in Victoria during the state's second wave of infections. They ranged from systems that collected the wastewater of 260 residents and staff near an aged-care facility to Melbourne’s largest sewage treatment plant, which pools wastewater from more than two million residents.

The samplers were constructed using cotton buds, medical gauze swabs and lab grade electronegative membranes, which were then encased in a narrow 3D-printed shell.

Importantly, the research also demonstrated that when the daily average SARS-CoV-2 concentration in wastewater exceeded 1 copy per mL, at least one of the passive samplers deployed at the same site on the same day was also positive.

Passive sampling involves the deployment of a device in a waterbody for a known time, allowing for pollutants in the water to interact with the device.

A number of wastewater surveillance sampling methods have been employed globally in the fight against COVID-19. Concentration has proved an important issue for untreated wastewater samples than primary sludge samples.

“These results indicate that cotton buds, electronegative membranes and gauzes can be used as passive samplers of SARS-CoV-2 in human wastewater,” he said.

“This is the first proof of concept that one or more of these passive samplers could be prime candidates for further optimisation to monitor for SARS-CoV-2 and for other problematic viruses in the future.”

The process of sewerage monitoring has so far proven difficult, especially in countries like Australia where there has been a low infection rate. This means that scientists are trying to find small numbers of infected stool samples out of tens of thousands of healthy samples.

“This is why efficient and portable methods are needed. The portability and size of the ‘torpedo’ means we can be more targeted in testing wastewater and narrow down the areas where people are likely to be shedding the virus, such as a suburb or aged-care facility,” McCarthy added.

“Above all, the 'torpedo' is cheap — roughly $20 each compared to more than $5000 for each automatic sampler — easy to use, and provides more consistent results than other sampling methods.”

In order to send the torpedo into action, researchers simply head out to a site, throw it into the water and let it sit for up to four days.

The design is akin to a fishing net, with the materials inside the torpedo absorbing traces of the Covid-19 virus as wastewater flows through it. The samples are then taken to a lab for analysis.

Early evidence indicates that the amount of virus that is caught in the device could be linked to the number of people infected in the catchment.

People infected with COVID-19 will generally shed or excrete the SARS-CoV-2 virus through faeces or by coughing or sneezing. These excretions end up in wastewater drains when people flush their toilets or take a shower.

There is evidence that this shedding or excretion begins early in the infection stage, sometimes even before a person experiences any flu-like symptoms.

In just five months, more than 2500 Torpedo Passive Samplers have been exported and used in all states and territories of Australia, New Zealand, Canada and the Netherlands, and are soon to arrive in the US and Indonesia.

The intellectual property for the device is open, and 3D printing files are able to be shared for immediate use.

Cecilia Harris
As the world continues the fight against COVID-19, water utilities around Australia are joining forces in a national project using… Read Full Paper

The latest on COVID-19 and wastewater 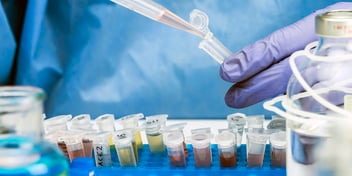 Cecilia Harris
While wastewater surveillance has proven to be a crucial early warning system in efforts to mitigate the COVID-19 pandemic, many… Read Full Paper
Advertising