In 2012, the Bill and Melinda Gates Foundation launched its first Reinvent the Toilet Challenge, inviting innovative researchers to develop next-generation prototypes that deliver safe and sustainable waste management to the 2.5 billion people worldwide without access to a toilet.

Almost 10 years later, the continued efforts of the challenge have resulted in the design of the Generation 2 Reinvented Toilet — a low-cost toilet now being further developed by researchers at the Georgia Institute of Technology.

“Over the last ten years, the Gates Foundation’s Reinvent the Toilet Challenge has invested in path-breaking science, engineering, and partnerships to develop safe and sustainable sanitation solutions that work without sewers, continuous electricity, or running water and meets ISO standard 30500 requirements for safety and performance,” he said.

“One of our innovation partners in this work, the Georgia Institute of Technology, is leading the development of the Generation 2 Reinvented Toilet [G2RT].

“The G2RT aims to eliminate the need for traditional sewage treatment infrastructure by creating a new system that processes waste onsite in household bathrooms. These include two approaches to the reinvented toilet.”

Kone said both G2RT toilets include a front-end featuring a passive separation system and a low vacuum pump that reduces flush volume to less than half a litre of water.

“They also use a liquid module that collects the urine and cleaning water from the front-end and treats it through membrane filtration,” he said.

“Using a filter-press and drying tunnel, the faeces get pasteurised, killing off all pathogens and eliminating odours before being pressed into cakes, which are then dried. These dry cakes can be combusted or disposed of in the trash or compost,” he said.

“Considered to be one of the most effective methods for processing wastewater to non-hazardous products, another approach combusts faeces underwater and produces ash suspended in water.

“Once the water goes through a filtration process and dried, it is discharged into a receptacle that users can dispose of in the trash or compost.”

The next stage of development of the G2RT designs marks important progress in water and sanitation initiatives, Kone said.

“In 2020, 3.6 billion people — nearly half the world’s population — used sanitation facilities and services that are unsafe for humans,” he said.

But Kone said leadership is still needed to make equal access to sanitation a reality worldwide.

“Getting new sanitation products to market and into communities where they can save lives and protect community health will require the leadership of private companies that are excited about building new businesses in the sanitation sector — to manufacture, deliver, and service the reinvented toilet,” he said.

“It will be critical for national and local governments to create policies and regulations that encourage innovative sanitation service models, including partnerships with the private sector that can deliver new products and services efficiently and at low-cost.”

Kone said the leadership of a growing number of countries embracing a smart approach to safe sanitation, including India, South Africa, China, Senegal, Bangladesh, and Nepal, are promising new markets for inclusive sanitation models that can leverage innovations.

“There is positive momentum among finance and development institutions that can support the early-stage adoption of new sanitation solutions like the reinvented toilet,” he said.

Kone said the Gates Foundation envisions a future where advanced sanitation technology is a new global standard for delivering safely-managed sanitation to communities and households.

“By creating the right incentives at every step along the sanitation chain — from collecting and transporting waste to treating it — it is possible to transform sanitation from an unreliable and unequal system that endangers the health and livelihoods of billions, into a valuable enterprise that benefits not just end users, but also governments, utilities, and new sanitation companies created to deliver sanitation to communities,” he said.

Cecilia Harris
Water utilities across Australia are reminding people about the dangers of flushing wet wipes and other products down the toilet,… Read Full Paper 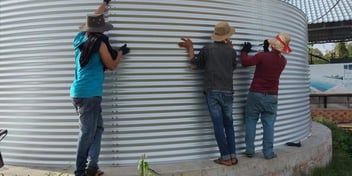