Water Tool team member Jessie Mah said the group started from scratch, first conducting research into what it is that makes a warning system tool effective.

“In an initial meeting with one of our mentors, Neil Plummer, we realised that the creation of effective tools for warning systems requires research into what it is that makes an effective warning system to start with,” Mah said.

“We considered the four key factors that produce an effective warning system, and from there we looked at the specific challenges and gaps, identifying areas where innovation was required in order to ensure any solution we designed would be effective.”

The team found that for an early warning system to be considered effective, it needs to have reliable and quality data input, a forecasting and warning capacity, be able to communicate the information that's being produced within the system effectively to the stakeholders, and have a response capability.

“It needs to be able to adapt to all the different scenarios that may occur, not only to forewarn and send out information, but also predict what could go wrong next,” she said.

The team then assessed each of the four requirements, identifying gaps or weaknesses that needed to be addressed in order to create a stronger warning system and improve on the models already available.

“We found that there was a lack of access to accurate, real-time data being inputted into these bushfire models, which also reduces the accuracy of the model's ability to predict,” Dayaratne said.

“But, with emerging technology, there's a lot of new ways of capturing that data. There's satellite imaging technology and also remote sensors that could be utilised.

“Furthermore, in terms of effective communication, one of the issues we identified was the difficulty with predicting human behaviour during emergency events, which have a tendency to impact the way important issues are communicated.”

Mah said the team decided their tool needed to be able to engage in cross-agency communication, as well as communication to stakeholders.

“This requires disseminating information correctly and effectively. It's hard to predict how everyone within a certain community will respond, so it’s important to make sure the tool helps people to be prepared and understand what those fire danger ratings mean to them, not just the authorities and the relevant agencies,” she said.

In terms of the response capability category, the Water Tool team found that there was a lack of coordination between all the authorities that are involved in a bushfire response.

“We realised we needed to address forecasting. There are so many models available in the literature, but they all utilise variable assumptions and parameters. We found that the best approach was not to view Bushfire models with the idea of one size fits all," Dayaratne said.

“But model inputs are going to effect outputs, which has the potential to compromise the accuracy of predictions. We found that iterating bushfire models and using existing data to improve them is very important.

“It's not something that can be fixed straight away. It's something where the inputs from the old model can be used to calibrate and improve models in the future. This isn’t being practiced at this point. But it's important to look at all bushfire models for various scenarios so that when the time comes, we know we are selecting the right approach.”

In terms of the ICMS tool blueprint designed by the team, Mah said the main aim was to create  a single source of truth, for all parties involved, including governments, emergency services, response teams and community members.

“We designed a tool that would address all four areas via an integrated, centralised management system. We were aiming to create a web-based platform for coordination and communication, including data inputs and outputs, which could all be managed and accessed from one source,” Mah said.

“In terms of input to the system, we have a community engagement element, which is probably the most important part in terms of bushfire preparedness training and planning for various scenarios.

“Another input is data, which would come from a centralised data storage and collection area. While there are many different platforms collecting and storing different types of real-time data, we think it needs to be collated in one central location to be easily sourced and used.”

Furthermore, Dayaratne said the ICMS would also have a visualisation tool embedded into it, to meet the need for clear and effective communication across various agencies.

“On the output end of it, we have a visualisation tool. This is for authorities and modellers, and it helps visualise what they've outfitted from their models, and also grants the ability for cross-agency coordinating and communication, all occurring in the same platform,” she said.

“We’ve built interactive social media feeds into the platform too, including a 'mark as safe' feature. Community users can type in an address and find out where the fires are in proximity to their location.

“With the interactive social media feed, our aim also was to target post bushfire recovery. It would allow for alerts to be placed in certain areas, depending on the hazards present: trees or powerlines down, for example.

“We wanted to do as much as we could to alert the community of post-fire hazards.” 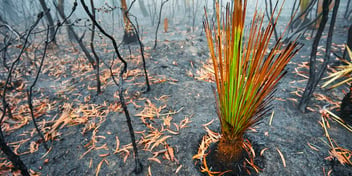